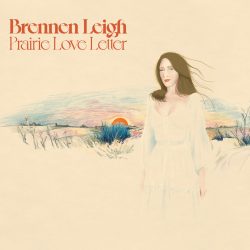 There’s a whole lot of the United States that is a bit of a blur for most people. We know about the East Coast from Chicago down to New Orleans; and maybe into Texas heading West. We know about the West Coast around LA and San Francisco, and maybe as far into the interior as Las Vegas. But there’s that whole sweep of Trump-voting small town America that most people fly over. Brennen Leigh is from here, the border of Minnesota and North Dakota, up near Canada, in the Mid-West. Now based in Nashville, and previously in Austin, this is a nostalgic album filled with memories of her Mid-West farming childhood.

Although Leigh may not have really come from ‘Elizabeth, Minnesota’ it is the kind of small rural town that forms the geography for this album. And the Scandinavian influence in this string band picker roots it firmly in that landscape. Although the idea of a concept album is more prog-rock than bluegrass this is precisely what ‘Prairie Love Letter’ is: an exploration of the area, peopled by characters from Leigh’s past from the slightly creepy character of ‘The North Dakota Cowboy’ to the complex love between the three friends in ‘Billy & Beau’.

There is a tension between feeling a sense of belonging, as on Leigh’s celebration of her family’s old tractor ‘The John Deere H’, to a sense of dislocation caused by an extended absence in the plaintive laments of ‘Don’t You Know I’m From Here’.

The album was produced by Robbie Fulks, himself a master of updating country tropes into a twenty-first century setting. This is exactly what Leigh achieves: leading a tight country band with her flat picked guitar style whilst singing about things that touch a twenty-first century heart. ‘Pipeline’ has evolved from the same country protest themes as the Louvin Brothers’ ‘Great Atomic Power’ but references the struggle over Native lands at Standing Rock Sacred Stone Camp in 2016.

Leigh has a stunning voice, the playing by the likes of Tim O’Brien and Noel McKay is superb and these songs stride a line between bucolic nostalgia and a genuine love for an area so often ignored without tipping over into the twee and sentimental.

Over the last fifty years I have probably tried to learn most instruments from the guitar to the trumpet, taking in the accordion and mandolin along the way. And failed. But as a music lover I started writing for magazines and websites about music around ten years ago. It's a break from my day to day life as a teacher and leader. View all posts by Peter Tomkins