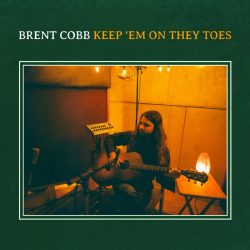 Cobb is a surname familiar to fans of quality Americana, with famed producer (and cousin of Brent) Dave Cobb having worked with some of the most widely acclaimed artists of recent years (Jason Isbell, Chris Stapleton, Brandi Carlisle and John Prine to name just a few); it would have been the easy thing for Brent to fall back on his familial connections and procure his cousin to produce his fourth album, but he had a different vision, enlisting producer Brad Cook to get the specific kind of sound he wanted: sparse but deliberate in its quiet moments. That’s something he achieves and more, saying everything he needs to in a soulful tone that’s neither overwhelming nor preachy.

The world seems fraughter than ever right now, but the country music world (specifically the part involving big record companies) is notoriously silent on the subject of politics, fearful of repercussions. There is a Taylor Swift quote from last year that perhaps sums it up best: “I come from country music. The number one thing they absolutely drill into you as a country artist, and you can ask any other country artist this, is ‘Don’t be like the Dixie Chicks!'” So it’s of little surprise that Cobb has decided to not hold his thoughts in on this record, as he’s now back to releasing as an independent artist after two album releases on a major label.

While on the less-talk-more-action minded track ‘Soapbox’ Cobb insists that he isn’t priggish and doesn’t believe he his opinions hold a lot of weight (“I don’t preach no tricks, don’t talk politics / I’m just a casual singer holding my stones and my sticks”), ‘Shut Up and Sing’ still feels eminently, if not completely political, then about the importance of not having fear of using your voice. On it, Cobb talks about the power of song to form opinions and takes on anyone who thinks musicians should keep those opinions to themselves. “Shut up and sing, “Lord have mercy on all us earthly fools” / There’s poison in our rhetoric and bullets in our schools,” he warns. “So I’ll sing, “What the hell is going on around here?” / Let’s take these blinders off our eyes and pull the cotton from our ears.”

‘Good Times and Good Love’ sees Cobb singing gently against soft harmonies, speaking of making the most of good times with the one you love when nothing lasts forever (“And darlin’, good times and good love don’t last forever / That’s too bad because those are two things I really like”). ‘Sometimes I’m a Clown’ is a wry retelling of the day-to-day struggle to get by: “Sun every morning, a pie to the face / But this rat in the wheel is still in the race, hey / There’s no sweat keepin’ the pace when you’re barely getting by”, while ‘This Side of the River’ sees Cobb take a more mature and thoughtful look at his life, using a river and its banks as a metaphor against an easy flowing musical backdrop. ‘Dust Under My Rug’ sees Cobb again assert his independent streak, this time against a jaunty melody, as he cautions others not to tell him how to live: “Now, don’t sweep your dust under my rug / Don’t hang your laundry on my line / Don’t drag my name through your mud / ‘Cause things just might get dirty if you try.”

On ‘When You Go’ and ‘Little Stuff’, Cook’s production is really felt with Cobb’s haunting vocals, the sparse instrumentals pulling full focus to his words (about letting go of the unnecessary on the former, and appreciating your loved ones and enjoying the simple but important things on the latter). While ‘The World Is Ending’ was written in 2011 about the then upcoming 2012 doomsday predicted when the Mayan calendar ran out, but is oddly prophetic to the current situation.

In the title track (co-written with Cobb’s wife as a message to their newborn son), Cobb laments, “Most people that you meet / Just about out their mind / They try to tell you how to live / They try to tell you how to die / They tell you don’t get too low, but don’t get too high / The best thing you can do is don’t listen too close / Walk on to your own beat / Keep ’em on they toes”. These words seem to be one he lives by: making the kind of music he wants to make and being the person he wants to be, regardless of what others think; and what a very valuable quality that is to have with pay-for-play country stations dominating the American landscape and an increasingly homogenized Nashville. Keep ‘em on they toes indeed.