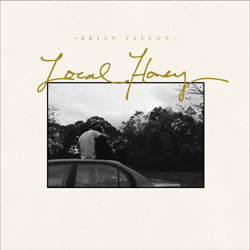 On his third solo outing, Brian Fallon, by now well away from the New Jersey garage band sound of Gaslight Anthem, moves further into the realm of introspective singer song writing. ‘Local Honey’ is a short (just over 30 minutes) collection of songs, some personal from a man entering middle age, others drawing on the grand tradition of storytelling. Fallon says that the album was influenced by several of his favourite songwriters, citing Dylan especially along with the production values of Daniel Lanois.

The album opens with some advice to his daughter on ‘When You’re Ready’ which is replete with gliding slide guitar over skittering percussion and a woody bass line. It’s a fine song and it generally indicates the album’s direction. ‘21 Days’ opens as if it were a love song and in a way it is as Fallon bids farewell to his nicotine habit. The backing is subtle although it leans a little too much towards the pretty boy singer light entertainment which dominates the radio waves today, while Fallon’s vocals also fall foul of the sin of too much emoting here. After all, it’s only a cigarette.

‘Vincent’ is much more sure footed, grounded as it is in the murder ballad tradition and its opening line is quite arresting, “My name is Jolene but I hate that song. Baptized in a river when I was young, Jesus forgives me for all of my sins except maybe that one when we were just kids.” Fallon goes on to deliver the song in the style of Willie Vlautin and his tales of bruised and abused heroines. Remaining in narrative mode, Fallon is closer to Springsteen on the neon glare of ‘Hard Feelings’ while ‘Lonely For You Only’ is an anthem for lost lovers. ‘Horses’ draws on a Wild West romanticism, a cross between Cormac McCarthy and teenage tearaways such as the anti heroes of Badlands while the closing ‘You Have Stolen My Heart’ is another unabashed dose of romance, given wings here by a wonderfully understated and sensitive band arrangement.