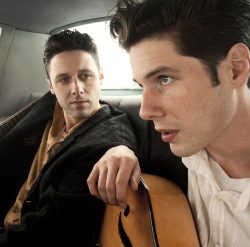 Brothers Jack and Page Burkhum aka The Cactus Blossoms are bringing their blend of country-tinged rock and roll to these shores in January for a short run of dates for that will be their first UK tour including a headline show at Bush Hall, London on January 23rd.  Born and raised in Minneapolis, the brothers found themselves drawn to classic folk and country music, honing their songwriting skills with weekly gigs at former country 1940s honkytonk The Turf Club in St. Paul, MN. A chance gig opening for JD McPherson brought him on board as a fan — he became the producer no less behind their debut album You’re Dreaming, songs from which you can hear at one of their dates.