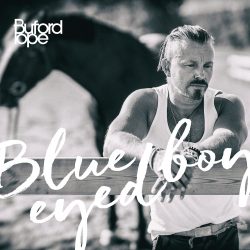 When Pope landed his fourth album, ‘Sticks in the Throat’, a few years back I had the sense he was about to explode, it was the best album that year, by some margin.  It was a plethora of punchy, rocking Americana.  It had everything – a good looking, cool guy, huge hooks, great riffs and a rock n’ roll attitude – particularly as English isn’t even his first language.  Strangely it seemed to pass the world by.

Back now with his sixth record, it is gentler, more subtle, more patience less urgent.  It is calmer, relaxed, chilled; more Sunday morning than Saturday night.  However, what harks back to previous records is the fact that it’s wonderfully written, beautifully played and sharply produced.  Pope is a pure gem, he just needs digging up.

He’s got a great crew on-board too, Tobias Froberg, a great artist in his own right on piano, a tribute to the albums calibre.  Elsewhere glorious harmonies abound, Worry Dolls on those duties.  Pope’s influences are, as always, obvious; Young, Springsteen, Earle, Felice Brothers and Fleet Foxes, and that’s what makes it so cool, it is everything you love, all in one record.

‘Hard Land’ embraces pastoral alt folk, it’s a wisp, then gone almost before it had started.  Similar artists sound of the space of the desert, of rumbling along the black top – Pope though is the same, and different at the same time, in his case it’s the sound track to a sturdy Volvo trundling through tarmac lined by pine forest, a moose in your headlights.

It’s that constant forward motion, you feel the travel of the record, urging you on from one track to the next then reaching for the repeat. Scandicana brilliance.

There’s a moose in your headlights.