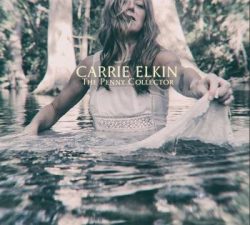 is is a highly personal and emotional album from Texan Carrie Elkin. Named in honour of her father who passed away over a year ago and who was a lifelong collector of pennies it is one of those pieces of work that is a slow grower that demands attention but one which leaves the listener richly rewarded. Elkin has pedigree, learning her craft from many years of touring and working with a number of musicians including the great Sam Baker. Whilst Baker does not appear on this album he is credited with helping to get the songs together.

Backed by the likes of Will Kimbrough on guitar and Neilson Hubbard on percussion and vocals who also takes production credits this is a fine piece of work. Elkin wrote all but one of the eleven songs here (the exception being a stripped down version of Paul Simon’s American Tune) which have an intensity that draws the listener in forcing close attention. Always On The Run is a love song about the inability of people to show their feelings a issue also tackled on My Brother Said although this time with a subtlety different twist. Elkin was clearly close to her father and many songs serve as a therapeutic release of her feelings, none more so than And The Birds Came which is a beautiful track detailing dark times but also focussing on the redemption that follows.

The album closer is Lamp Of The Body an almost eerie track referring to the eye as the lamp in this context and interspersing the lyrics of This Little Light Of Mine. An album to make you sit back and reflect.
6/10
6/10

A highly emotional and personal offering from Texan based singer songwriter