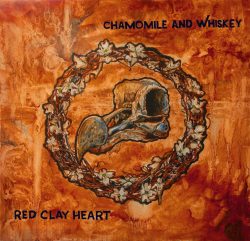 The opening track  ‘Red Clay Heart’ falls on the whiskey side of that equation and as a result is a bit of a fooler. ‘Way Back’ is pure, swaggering, thundering Southern rock, but the rest of the album doesn’t follow suit. From the first few ominous murder-ballad notes of the next track, ‘Dead Bird,’ it’s clear that this is a much more emotionally complex, pensive, and stark release.

‘Alright’ and the self-recriminating love song ‘Never Live Up’ display singer-songwriter, piano player, and guitarist Kerl’s powerful talent as a lyricist and Borgman’s heart-wrenching fiddle playing. ‘Alright’ accurately captures anxiety and recursive, maundering, negative thought spirals (“It’s gonna be alright / Maybe it won’t / You carry on / You make it through / Unless you don’t”). Producer Ken Coomer, former drummer for Wilco and Uncle Tupelo, seems to have steered the album in this thoughtful direction. Even when the music is upbeat and resplendent with riffs, like ‘Hard Time Honey’ and the “driving song” ‘Triumph,’ with its defiant beacon of hope named Kelly, the lyrics still tend toward darkness. Like The Waterboys’ Mike Scott, Jason Isbell, Dylan, or Prine, Kerl has obviously seen and experienced a lot – maybe too much – in his thirty years.

It is odd, then, that the band has been accused by a few members of their local music scene of not taking themselves and their music seriously enough, due to their wild, raucous live shows, most notably their annual St. Patrick’s Day show at the Jefferson Theater on Main Street in Charlottesville, Virginia. The celebratory, singalong checklist of bad behaviour ‘The Best of the Worst’ is an unpretentious, good-natured response to this charge: ‘A small town with a big mouth.’ Have their critics ever seen a Mojo Nixon show?

That love-hate, push-pull relationship a person can have with his or her small hometown is an ongoing theme in Kerl’s work. ‘Another Wake’ perfectly describes loss and grief and could be played anytime, anywhere, from the Blue Ridge Mountains to Dublin, and still apply to listeners’ lives: ‘My bar is hosting another wake.’ It was written after Kerl and Borgman lost people close to them and also after the band’s adopted hometown of Charlottesville was inundated with white supremacists during the violent August 2017 Unite the Right rally.

The final emotional punch in the gut is ‘Heartbreak (Luke’s Song),’ written for the band’s friend, local musician “Drunk Luke” Smith. You have to love any community where people are given affectionate nicknames like “Drunk Luke.” This mournful, world-weary song features Kerl alone with his acoustic guitar, recorded on the second take after he had a chance to knock back a shot of, yes, whiskey before singing: ‘Life is a slow, beautiful heartbreak.’ Amen to that.