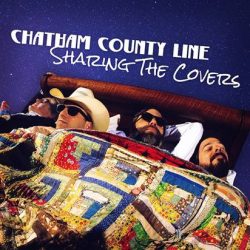 ‘Sharing the Covers’ is Chatham County Line’s eighth album, which means fans of this Raleigh-based fourpiece know by now they’ll likely be in for a faultlessly produced and smoothly performed collection of bluegrass music  – and they won’t be disappointed. And given this band’s proven ability to create an entire song’s lyrics  ‘Ringing in My Ears’  out of lines borrowed from Paul Simon, George Harrison, Willie Nelson et al, as well as their having versioned ‘I Shall Be Released’  way back on their second LP, a CCL covers album isn’t such a surprise in itself.

What is less predictable the sheer range of  musical influences to which CCL  wish to pay tribute on this latest, 13-track album. OK, ‘I Got You (At The End Of The Century)’ isn’t exactly off the Americana radar, though the rip-roaring enthusiasm and pace of their cover  is all CCL’s own doing, and  towards the far end of the album, reworking John Hartford’s ‘Grand Ole Opry’ seems equally reasonable. (Given that Hartford himself once did a bluegrass covers album ‘Retrograss’ it feels almost like an in-joke.)

But these are not the tracks that make ‘Sharing the Covers’ such a powerful celebration of musical diversity. Rather, it’s the  combination of much more improbable tributes –   like, say, their version of jazz guitar giant Johnny Smith’s ‘Walk Don’t Run’,  or ‘I Think I’m in Love’ by art popster Beck or Irish soul singer James Hunter’s ‘People Gonna Talk’ – and the care and passion with which they’ve been re-arranged into bluegrass numbers. Put simply, it feels like the Chatham County Liners have chosen a collection of songs that really matter to them, for whatever reason, and then do their utmost to honour them in their own musical style.

Somewhere between the two extremes of predictable and surprising cover of ‘Watching the Wheels Go Round’ hits home so hard you wonder why John Lennon didn’t use a banjo for the opening riff.   ‘Girl on the Billboard’  makes you want to re-hear the original too, if only to check that Del Reeves really does have his haplessly lovestruck lorry driver-cum-narrator describe himself as “a double-clutching weasel”. (For the record, he does.)  Furthermore, Tom Petty fans will doubtless approve that the harmonica solo which features in the original  ‘You Don’t Know How It Feels’ is also present here – and just like the original, giving a huge lift to the CCL version.

It feels right somehow that rather than get overly experimental in an album that is all about honing very different material into one style, there’s no tracks with, say, drums (which CCL used to great effect in their fifth album, ‘Wildwood’)  or electric guitars. But whilst  the purists can still  (and probably will) quibble at the piano leading the way on ‘Lay Down My Old Guitar’ -a nice musical irony, bearing in mind the song title – it’d be their loss, given  the heart-stoppingly melancholy beauty of  CCL’s version, bringing down the curtain on this fine album in  the finest of styles.

A powerful celebration of musical diversity