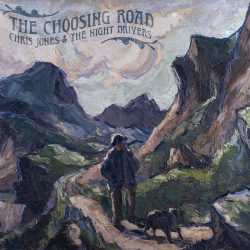 ress release accompanying Chris Jones’ new album he says, “I decided this time around to open up more with my writing and worry less about how songs would be perceived by different audiences.” What he has ended up with is a mix of traditional and modern Bluegrass that works well as individual songs but is not perhaps the most coherent album.

It comes as no surprise to find that he grew up listening to Ralph Stanley. The opener ‘Your Remarkable Return’ sets off at a Banjo and Mandolin powered gallop. Mark Stoffel on mandolin and Banjo player Gina Furtado are both very much on the modern side of Bluegrass with complex solos, particularly on the up-tempo material. It is, however, the slower songs where they are most effective – ‘I’ll Watch Her Sail’ and ‘I Shouldn’t Even Be Here’ particularly. The slower tempo also suits Jones’ warm baritone voice better.

The album almost divides in two with the break coming at instrumental ‘Nyhan’s Regret’ which wouldn’t be out of place in a Scottish pub. The Banjo & Mandolin gymnastics are restrained on this tune by Liz Carroll’s fiddle. After this the feel of the album becomes generally more relaxed. The better songs are certainly on this second half of the record, with the first part sounding like it was occupied by the more experimental writing. Here too is a cover of Steve Winwood’s ‘Back In The High Life’ which has a definite made for country radio feel, making the fact that ‘Bend In The Road’, one of the most traditional Bluegrass songs here, was a number one radio hit a bit ironic.

This album grows on you with repeated plays, Jones’ voice takes some time to appreciate, and the subtler textures of the songs need a while to pick out from the blizzard of intricate solos. The best songs are the last two: ‘Own The Blues’ where a bit of steel guitar adds to the texture of the song, and closer ‘Glimpse of the Kingdom’, a minor key piece that is probably a highlight of their live shows.

Overall then, a solid album that, while pushing the boundaries of Bluegrass in places, is an easy listen, and one worth persevering with.

A modern bluegrass album with traditional values and good tunes