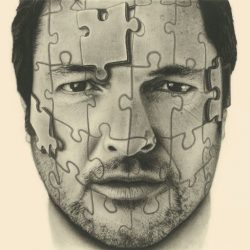 This lovely album on the folk side of Americana is a keeper. It’s based on Ronald’s clear-voiced singing and moving songwriting, augmented by fingerpicked guitar, fiddle, harmonica and the occasional banjo, mandolin and drums. Ronald is a Brit living now in Canada, and his music reflects the influence of folk music from both sides of the Atlantic – and the music of many eras, as well. He wrote 11 of the 12 tracks on the album. The lone exception is ‘Okanagan Sunset’, which was written by the author and poet Bruce Madole.

Ronald began writing songs at the age of 15, when he set to music a poem he had written. The fact that he indulged in poetry before he came to music shows in that, at times, the lyrics can seem a bit impenetrable. In ‘Rain City Blues’, for example, he sings: “A cacophony of axes chopping strings is the next thing on the program then it’s scissors clipping wings”. But always, always, the music saves the day. And over time the lyrics will no doubt speak to you more clearly and in many different ways.

Not all the lyrics are inscrutable – not by any means. The album begins with ‘Everything Goes Green’, a song about the changing of the seasons and the fact that hope endures even as autumn turns to winter, both literally and metaphorically: “Everything goes green again before too long”, Ronald sings, and surely that is true. The song, one of the highlights on an album filled with them, features fingerpicked guitar, fiddle and harmonica, all of which combine with Ronald’s fine singing in the most harmonious way.

‘Get Back In The Game’ is a bouncier tune, an admonition to rise again from setbacks. This song rocks a bit more than some of the others; it features drums and a driving bass line. ‘Continents’, with its talk of growing gaps and continents drifting apart, appears to be a break-up song. And ‘Freedom Train’ – which is about striving together, hand-in-hand, against the odds – is enlivened by banjo and an Irish-flavoured fiddle break. ‘Retirement Plan’, featuring Ronald on ukulele, is an upbeat, happy tune with a jaunty beat. “Oh how easy it could be to keep working for the man”, he sings. “But this is my retirement plan/Making music while I can”.

Oddly, the least satisfying song in the bunch is the a cappella title cut, ‘Fragments’, the album’s final track. Virtually every couplet in the lyrics begins “A fragment is …” and then goes on to list a moment of joy, love, grief or memory. It will come as no surprise to anyone who’s ever given it a moment’s thought that life is a kaleidoscope of experiences and memories, so the song comes off as a bit less profound than may have been intended.

But this is a minor complaint. This is a beautiful album, one to be treasured for years to come.

A delightful folk-oriented album that will enhance any collection