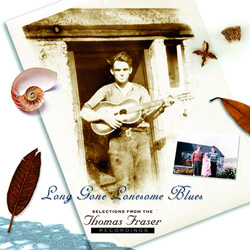 You really couldn’t make up a story like this. A Scots fisherman, Thomas Fraser, living on the Shetland Isles, born in 1927, fell in love with country blues and Jimmie Rogers in particular. A proficient musician, Fraser purchased a reel to reel recorder, the first to arrive on the islands back in 1953, and over the next 20 years recorded himself singing and playing hundreds of songs learned from the likes of Rogers along with show tunes and doo wop favourites. After his death in 1978 his nephew gradually transferred the fragile tapes (to cassette at first) and then to CD and they trickled out to some acclaim before the first of six albums was officially released in 2002.

No doubt the novelty of the story, this singing fisherman covering the singing brakesman, was the lure for the many news items which followed but the fact that Fraser actually inhabited the songs he recorded, sounding for all the world as if he had ridden the rails with Rogers, yodelling all the way, impressed fans and collectors of vintage country blues. It’s astonishing to listen to Fraser singing  the title song here, his voice high and lonesome, his guitar picking perfect, the whole a perfect capture of a world an ocean away and several decades removed from when it was recorded.

This item under review was released on Record Store Day and is the first vinyl release of any of Fraser’s recordings marking the fortieth anniversary of his death.  The 17 songs on show were remastered for the disc with no indication here that they were recorded in a croft on basic equipment. The sound is vibrant and intimate although the vintage patina which befits these songs is retained. As Fraser became more proficient with his reel to reel he multitracked so that ‘Lullaby Yodel’ finds him making wailing baby sounds as he sings the words. He covers Rogers (of course) but also other yodellers such as Wilf Carter and Montana Slim along with three Hank Snow numbers and listening to them you can imagine the likes of Dylan or Pokey La Farge finding much to like here. Meanwhile his cover of The Mills Brothers’ ‘Don’t Be A Baby, Baby‘ is endearingly reminiscent of Laurel and Hardy’s brief forays into music and the closing ‘Over The Rainbow’ is a startling exhumation of this well worn song.  For sheer joy and chills however Fraser’s delivery of ‘Whippin’ That Old TB’ is hard to beat.

Limited to a 500 print run the disc is well packaged with informative liner notes and as vinyl goes it’s a wonderful artefact. Some judicial Googling reveals that copies are still available.