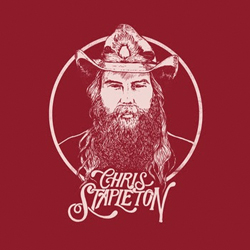 With his second release of the year, Chris Stapleton pretty much cements his reputation as traditional  country music’s biggest star. Songs From A Room Volume 1 (released in May) won the award for album of the year at the Country Music Association Awards and on its release last week, Volume 2 hit the number two spot on the Billboard charts. In what has been seen as a traditionalist fightback against bro country and the pop/rock orientated songs that have recently been ruling the roost in Nashville, Stapleton (who, it could be argued has a foot in each camp) has led the charge.

Recorded, like its predecessor, in Nashville’s historic RCA Studio A with producer Dave Cobb, Volume 2 is very much a companion piece, a similar mix of hard rocking songs and gentler ballads with Stapleton’s stentorian voice driving much of the album along. Like Waylon Jennings, Stapleton sounds as if he was born to sing gritty country songs, he whoops and hollers brilliantly and his opening lines on Hard Livin‘ are delivered with just the right amount of bourbon swilling braggadocio.  The song itself is a corkscrewed country rocker, sinewy and snarly and looking for a fight. There’s another mighty rumble on Midnight Train To Memphis (a song Stapleton originally recorded with his band The Steeldrivers) which pummels along fuelled by raging guitars and a hefty riff, but for much of the album Stapleton is in a more reflective mood and turns the volume down.

He opens with a cover of Kevin Welch’s Millionaire, harmonising with his wife Morgane, on a tough but tender ballad, the pair of them proclaiming, “love is more precious than gold, it can’t be bought and it can’t be sold.” Scarecrow In the Garden is a finely sung tale of a farmer down on his uppers, inheriting a once prosperous acreage but by the end of the song sitting with a bible in his left hand and a pistol in his right. A Simple Song is indeed, just that as Stapleton dials it down to acoustic guitar, double bass and a patter of percussion as he sings of the day to day worries of a blue collar worker while finding comfort in, “the kids and the dogs and you and me.” Reminiscent of the stripped back songs on Hayes Carll’s Lovers And Leavers it’s quietly majestic. Drunkard’s Prayer is another stripped back song with just Stapleton and his guitar on a song about a drunk who only feels close to God when he’s drinking, an example of lying in the gutter, looking at the stars. Closing the album is another cover, the Gospel tinged Friendship, written by Homer Banks and Lester Snell with Pops Staples’ version perhaps the best known. A slow burning slice of Southern soul with a fine guitar solo unveiled midway, it recalls the likes of Delaney and Bonnie with Stapleton and his wife taking on their roles.  The theme of friendship trumping any barriers kind of rewinds the album to its opening song where love conquered all.

Compared to Volume 1 this reviewer reckons that the current disc just has the edge. It’s more reflective with less swagger but considered as a whole,  both volumes are essential listening for anyone interested in the current country scene.