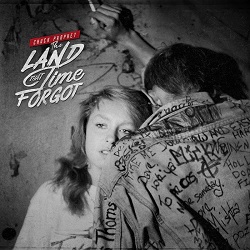 ‘The Land that Time Forgot’ finds Chuck Prophet in something of a nostalgic mood, although when he looks back it can be with anger usually conveyed by a sarcastic sneer – but there’s also fondness, regret, compassion, empathy and a celebration of old friends and heroes.  There’s a bright, and typically paradoxical, opener to the album with ‘Best Shirt On’ which has Prophet singing “I’ve got my best shirt on / Another one just like it hanging in my closet” over an almost sixties girl-group arrangement.  Light and cool.

There’s a mood change for the slow and groovy ‘High as Johnny Thunders’ which posits how a series of alternate histories could play out “If Bukowski was good looking / and Napoleon was tall / If Joan of Arc just took her meds she’d be a movie star” – but the important thing through it all is that The New York Dolls would still be around.  ‘Marathon’ is a glorious mash-up of  traditional rock and roll with a metronomic bass beat and an injection of swoops of fluttering electronica. Ostensibly a song about a dance marathon it could just as well be a testament for living life with another: “On a moonlit night / We’ll hold each other tight / We’ll be in Black and White / ’til we all fall down – it’s a marathon.” Or, put another way: with you to the end, babe.

And enjoyable as these songs are, classic Chuck Prophet numbers all, it’s the introduction of a political element that really makes ‘The Land that Time Forgot’ an album for these times. It’s not all fun and games and rock and roll – and Chuck Prophet knows this. The subtlest of these songs is the slow and mournful ‘Paying My Respects to the Train’, which has the sound of a break-up song, but takes a nod to Lincoln’s funeral train. The chunky ‘Love Doesn’t Come From the Barrel of a Gun’ mixes a romantic ballad with lyrics that can also be read as comment on gun control. These are fairly subtle, ‘Nixonland‘ is less obscured, being a narrative of what it was like to grow up in Nixon’s hometown – with the irony of school trips linked to sites the president had known.  A president who would outdo other politicians: “politicians manoeuvre, negotiate, yeah they lie they cheat and they scam / He cut a trail through the DMZ all the way up to Nixonland.”  Supported by the edgiest guitar on the album it’s a real standout. When Prophet remarks that “he talked about himself like he was someone else / in the third person I guess you’d say” it’s hard not to think of a similarly devious future holder of the same office.  That person is clearly on Chuck Prophet’s mind  as well, and he gets the album closer – the jaunty ‘Get Off the Stage’ which holds nothing back in its sarcastic put down of the Clown in Chief: “you, you’ve got an ugly mouth / you got no heart at all except for your Russian pal / You’re an obstruction in Democracy’s bowel / and the patient is dying”

The unsurprising presence of Stephanie Finch helps to make a good album great – her harmonising and duetting vocals are all over the album which serves to make it feel somewhat akin to her own Chuck Prophet backed release ‘Cry Tomorrow‘, an album that should be in every record collection. As should ‘’The Land That Time Forgot’.

Nostalgia never sounded so timely, whilst things get said that need to be said. With guitar.