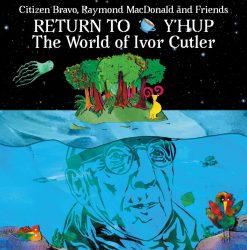 Ivor Cutler was a unique Scottish artist, poet, songwriter, teacher, humourist and mainstay of British Radio who died in 2006 aged 83 and was very probably a genius. The depression of the ‘30s, his Jewish background and experience of anti-Semitism and a challenging home life all had a major impact on his work. The word eccentric is often associated with him but absurdist would be closer to the truth with major fan Billy Connolly saying the world needed Ivor Cutler “in order to think differently”. In the late ’50s he was given a late-night slot on the Home Service and since then he has appeared on all major BBC Radio stations being championed by John Peel and Andy Kershaw. John Lennon and Paul McCartney were such fans they gave him a cameo as Buster Bloodvessel, the bus conductor, in the Beatles’ ‘Magical Mystery Tour’.

His songs and prose are best described as surrealist folk but even this term is probably too limiting. He recorded a number of EPs and albums accompanying himself mainly on harmonium and piano. Ivor Cutler has influenced numerous artists including Robert Wyatt, Elvis Costello, Jim O’Rourke, Kathryn Williams and KT Tunstall and he has had a particular influence on the postmodern bands of Glasgow with Belle and Sebastian, BMX Bandits, Teenage Fanclub and Franz Ferdinand claiming him as a particular influence and it is his Scottish fans who are behind ‘Return To Y’Up – The World Of Ivor Cutler’.

The prime movers behind this tribute are Citizen Bravo (Matt Brennan a musician and academic), Raymond MacDonald (Glasgow Improvisers Orchestra), Malcolm Benzie (Eagleowl) and Andy Monaghan (Frightened Rabbit), plus significant players of Scottish indie, folk, rock and pop. There is added legitimacy in Phyllis King, poet and long-time companion and collaborator of Ivor Cutler being featured, and together with Robert Wyatt, they are the only English artists on the album. The album is launched with a live performance as part of Celtic Connections on 29th January.

Y’Up was an imaginary island that featured in much of Ivor Cutler’s early work and the majority of the 26 tracks on the album come from his early career. How do you arrange the music for a tribute to such a singularly idiosyncratic artist? The fact that much of his recorded work featured his ambient use of the harmonium is probably the musical clue that enabled the much richer arrangements of his music to be created here.

The lead single ‘Here’s A Health For Simon’ is a good introduction to the whole album, including as it does, Ivor Cutler’s own voice. The closing track ‘Beautiful Cosmos’ is one of his greatest compositions, and in between, there is the whole world of Ivor Cutler including trousers, Boo Boo birds, cows, yams, knees, vitamin P, shoplifters and much more. As a heartfelt tribute with interesting musical backing to great lyrics this is a fine album, but the real deal is Ivor Cutler’s own recorded works and if this album creates more Cutler fans then those involved can consider it a job well done. What would Ivor think? We will never know but as a member of the Noise Abatement Society he probably would have covered his ears and said “too loud”.