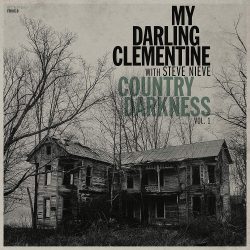 ‘Country Darkness Vol. 1′ is a four-track EP of Elvis Costello songs performed by Michael Weston King and Lou Dalgleish AKA My Darling Clementine. The duo has been described by the Guardian as “a bravely unfashionable British Band who set out to play tribute to those great country duos Tammy and George, or Johnny Cash and June Carter. And they do it remarkably well”, and on the pages of this site as “one of the best bands the UK has offered in a good while”.

This being Vol. 1, more, perhaps unsurprisingly, is promised to further explore and rework more Costello country songs to duet. In fact, the band are well connected with Costello; Dalgleish wrote and performed in a play about obsession and infatuation which was based around Costello songs, while Costello collaborator Martin Belmont plays in the MDC touring band, while the Brodsky quartet blips on the radar of both artists. Most prominently, this volume also features the keyboard playing of Steve Nieve. The mutual roots, do indeed, run deep.

Given all of that, it is safer to say that the songs on offer here are Costello with a MDC twist rather than a full-scale reimagining. Indeed, the raw material for two of the songs is largely already shaped as they are from very country-tinged Costello albums: ‘Heart Shaped Bruise’ from the 2004 offering ‘The Delivery Man’ and ‘I Felt the Chill Before Winter Came’ co-written by Costello and Loretta Lynn, from ‘Secret, Profane & Sugarcane’.  While ‘The Day is Done’ was co-written with Paul McCartney and appears on the gospel group the Fairfield Four’s  ‘The Fairfield Four and Friends Live’. ‘Stranger in the House’ from Costello’s debut ‘My Aim is True’ when he was recognised more as a new wave/pub rock artist is the one that perhaps represents more of an exploratory interpretation.

Performed as duos the songs work extremely well, not least because Weston King and Dalgleish are accomplished artists who know what they are doing. Each song has a recognisable kernel of Costello; taking another artist’s songs and knowing what to add (or take away) without spoiling what made them unique to the writer is a difficult task. The addition of Steve Nieve is nice, his keyboards may not layer the songs with a signature sound, but there is something very satisfying about the completeness of having him contribute to these tunes. All in all, Vol 1. Is a tantalising entrée which leaves the listener hungry for more.