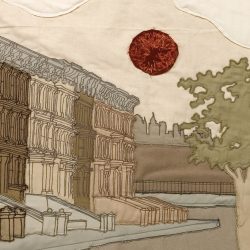 There’s something about Conor Oberst, lead singer of Bright Eyes, that presses all my emotional buttons. That cracked voice, those sweet lyrics, music that veers from barely there to full-on rocking guitars. And it was this album that really cemented for me that while I could *pretend* that it was his indie-rock boy music that I loved, it was truly this album that had taken my heart. ‘I’m Wide Awake, It’s Morning’ is so undeniably folk-americana that it hurts. It’s got all the hallmarks of a great alt-country album, not least that country-royalty Emmylou Harris features on three tracks.

It’s the lyrics that really stand out. Oberst in turn will half speak lyrics, scream them, and sing with a stunning scratchy tone that makes you believe that everything he says is about to make him cry. From memories of his lost loves represented by the “yellow bird” to commentary on crowd demonstrations captured on camera “all the way home held your camera like a bible, just wishing so bad that it held some kind of truth”, the album covers life, loves and war.

There are simply beautiful images to be had throughout and Oberst scatters them for you to find like they mean nothing “You were born inside of a raindrop”, “I’m a single cell, on a serpent’s tongue”, “the sun came up with no conclusions”.

The album begins with ‘At the Bottom of Everything’, Oberst takes a sip of water in order to start telling the story of a woman on a doomed aeroplane. As soon as the aircraft begins to plummet, it’s turned into a fast-paced country tune, part celebratory, part in jest. Yet lyrically he’s making comments on the futility of life, on gun crime, on society: “Set fire to the preacher who is promising us hell”. And then ultimately the final realisation “I found out I am really no one”.

‘Lua’ is the centrepiece of the album. A stripped-back almost spoken piece about living in New York city. The endless parties pitched against the loneliness and the drugs “We might die from medication but we sure killed all the pain”. The cycle of each night on a high and each morning facing the low is exquisitely described by Oberst’s lyrics “what was normal in the evening by the morning seems insane”.

With a backdrop of heady pedal steel, ‘Train under Water’ manages to bring joy to a song largely about being alone and unsure “And if I don’t come back. I mean, if I get sidetracked. It’s only ‘cause I wanted to”.

Emmylou Harris provides a fragile backing to Oberst on ‘Landlocked Blues’. She almost trails his delivery a mere micro-second out – but it’s beautiful.

One of the most poignant songs on this album is ‘Poison Oak’. Oberst sounds on the verge of tears with every breath. He describes the pain of someone close to him leaving and escaping their life “I’m glad you got away but I’m still stuck out here… the sound of loneliness makes me happier”.

This would have been a delicate and sad way to end the album, but Bright Eyes instead throw in ‘Road to Joy’ a rollicking song on the futility of war. The call to arms “I could have been a famous singer, if I had someone else’s voice. But failure’s always sounded better, let’s fuck it up boys. Make some noise” results in the band throwing together a cacophony of trumpets, drums and organs. It’s a glorious and uplifting finale to an incredibly emotional album.