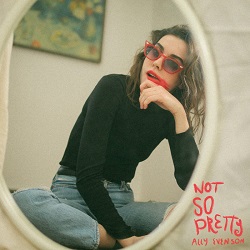 Ally Evenson’s new five-track EP starts at the end of the affair, or at least at the beginning of the end – which means that it is saturated with the sadness of romantic loss – from that first doubt that things aren’t where they were through the sudden realisation that there’s an absence, a physical removal of love. Regret and the false hope of moving on, putting that all in the past and thinking that a fresh start is beckoning finally gives way to the emotionally draining but more real acceptance that things aren’t going to resolve in a romantic-comedy way: there’s no mutual realisation that “we’re being crazy, we should be together forever“, followed by an embrace and roll credits.

What makes this all the more impressive is that ‘Not so Pretty‘ is the debut release from the Detroit singer, you listen to ‘Why Don’t You Call Me Anymore‘ and simply wonder at the sophistication on display – both musically and lyrically; there’s a real bittersweet quality to the song “And it’s a shame how we’ve ended up this way / But it feels so good to see you walk away/ From me“. It’s a masterclass in heartbreak, with Ally Evenson’s perfectly dreamy vocal both plaintive and aching. The rituals of destruction marking a true severance that fill ‘Burning Room‘ are followed with a change to the semi-upbeat, but still drenched in melancholy, of ‘More of a Happiness‘ – here it’s rituals again, but this time the rituals of a new start “look up even when the sky is crying over the clouds the sun is always trying/sipping coffee with the cat sometimes the little things that please me / take it easy – I’m more of a happiness.”  The almost sixties girl band feel of the song belies the positivity though.

The final song ‘Too Late‘, another soft-toned introspective ballad questions whether a true and lasting mixing of emotions will ever happen – is there a personality flaw in herself that will prevent this “if I don’t change / will you grow to hate the sound of my name? / Will I ever be enough with all my ways of screwing up? / If you fix me now it won’t be too late.”  And to dance with this self-loathing there’s the prospect of being walked away from for being…just not enough: “when you’re tired of me will you let me go? / Will your big stupid heart refuse to tell me no? / Will you turn cold and will the feeling of me start to just feel old?” On her debut release Ally Evenson has captured the brooding sadness of love gone wrong, where not even an awkward friendship remains. It’s painful feelings, spiralling into self-doubt – but oh it sounds so lovely.

Beautiful melancholy from a broken heart