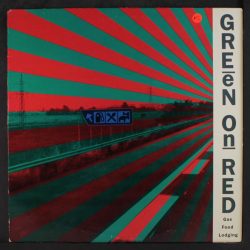 ‘Desert Rock’, ‘Paisley Underground’, Alternative Country-Rock’, ‘Garage-Country’ and ‘Country-Punk’ are all descriptions that have, at various times, been applied to Green on Red. The fact that these and plenty more descriptions can be found with a quick Google search suggests that contemporary commentators struggled to pin the band down, and that perhaps Green on Red actually defy convenient tagging or restrictive pigeon-holing. Moreover, their music was something quite unique and reaffirming, particularly when set into the context of the musical and political landscape of mid-eighties America. In case a reminder is needed, it was the era of electronic pop music, all synths and silly haircuts, and perhaps even more depressingly, the eighties book-ended the Presidency of Ronald Reagan (1981-1989).

In 1985 Green on Red moved away from the raw garage-psychedelia of their early records with the release of their finest achievement ‘Gas Food Lodging‘. The album shifted their sound towards a more country-influenced roots-rock sound. In their 2003 review of the record’s re-issue Uncut described the band as “path beaters between early ’70s Outlaw Country and early ’90s No Depressionism”. Echoes of The Doors, Dylan, The Stones and Creedence could all be detected. However, the influence looming largest over the record, was that of Neil Young. Whilst these touchstones are convenient for establishing the base of their recipe, it was the ingredients that the band themselves added to the stew that really spiced it up. Dan Stuart’s vocals, in equal measures part growl, part scream and part drawl, lived every emotion of every song. The album also marked the introduction of Chuck Prophet into the band. The twang, twist and twirl of his guitar decorating each track like gold leaf on antique furniture.

The songs featured characters that might have been taken straight out of an American fiction seminar, the lonesome, the loveless and various categories of the dispossessed: drifters, drunks and losers. They shone a light on those who trickle down ‘Reaganomics’ had failed to reach. It was blue-collar rock, complete with the dirt and the grime. This, along with the focus on the outsider, appealed to many, who like a large proportion of the band, had been through punk rock but were now looking for new sounds. As well as being new and fresh, Gas Food Lodging also shone a light backwards and introduced many to the great musical heritage that we now call Americana. Jeff Tweedy and Jay Farrar were said to be fans and in their band, Uncle Tupelo, pioneers of the No Depression/ Alt. Country scene, you can hear the influence that Gas Food Lodging had on them.

Green on Red were a great band, as all who ever saw them live will surely testify, and Gas Food Lodging is without question their finest record, a real career high point. Reviewing it for the NME on its release in 1985, Mat Snow observed that “for lost soul, lost highways and lost innocence, ‘Gas Food Lodging’ ranks with ‘Rust Never Sleeps’: sweaty, unshaven denim melancholy ain’t smelled so sweet in years.” I’ll drink to that.