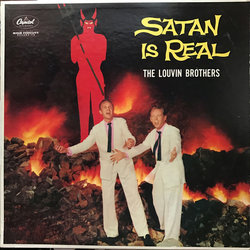 What is it about an album by a god-fearing, religiously obsessed duo born nearly a century ago that appeals so much to a militant atheist? The answer: it’s all about the harmonies – so good at times they appear to be otherworldly. For roots music and all its different sub-genres, the Louvin Brothers date so far back they meet the classic Americana tag line probably better than most records to appear so far in this feature, but the ultra-clean production is quite extraordinary for an album cut in 1959 – and one which sounds almost futuristic at times. You could put the best microphones in the most expensive studios today and you’d still struggle to get a sound as good as the vocals here.

For the uninitiated, “hillbilly gospel country” might be one way of describing the Louvin Brothers. Ira and Charlie Loudermilk hailed from the Alabama Appalachians but for some reason they considered Louvin to be a more promising stage name. The uniqueness of their sound was best described by Kris Kristofferson as “blood harmony”, the genetic link between the brothers manifesting itself in an almost unnatural ability between the two of them to share the same vocal tones. This is probably best exemplified on a song they released as a single 4 years before ‘Satan Is Real’ in 1955 – ‘When I Stop Dreaming’ – their extraordinary ability to imitate each other’s vocal stylings, the soaring and swooping nature of which makes it almost impossible to work out which brother is singing in the higher range throughout the chorus.

‘Satan Is Real’ has become almost as renowned in recent years for its album cover as much as its content, which features the brothers in white evangelist suits with their arms outstretched. Behind them a burning pile of tires represent the flames of hell. Towering over the tires, a huge red cardboard Satan stands guard over what in real life was actually an old quarry. The cover would be even more hilarious if the brothers’ ideas of inescapable damnation weren’t sung with such absolute conviction. The title track, which includes a spoken word testimonial, somewhat laughingly blames Satan for the failures and foibles of ordinary mortals, but there’s no humour to be had at the Louvins’ expense given the beauty and precision of their vocalising.

On a record with many highlights some of the standout tracks are the call and response of ‘There’s A Higher Power’, ‘The Christian Life’ – covered by the Byrds on ‘Sweetheart Of The Rodeo’ (largely at the instigation of Gram Parsons, for whom the Louvins were a touchstone) – while ‘River Of Jordan’, with its thumping rhythmic bass, immediately brings to mind the sound of Johnny Cash, and ‘The Angels Rejoiced Last Night’ is also gloriously uplifting with a real sense of swing.

By the time they started to become successful, the Louvin Brothers were already becoming somewhat old hat, their more traditional gospel style making way for more popular country acts, but their influence on other artists can’t be overstated – not only the aforementioned Gram Parsons, for whom the Louvins were, according to Steve Earle, “his obsession”, but also the likes of Emmylou Harris, the Everly Brothers and The Beatles. For good reason the Los Angeles Times called them “the most influential harmony team in the history of country music”, and while you don’t need to share their spiritual beliefs to be moved by the beauty of this record, it’s testament to the fact that the devil still has some of the best tunes.