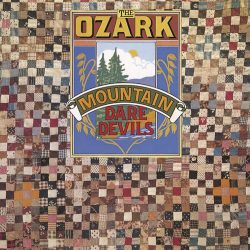 Mention the Ozark Mountain Daredevils these days and most responses would be along the lines of “didn’t they have some soft, country-ish single in our charts years ago?”. Yes, that was ‘Jackie Blue’ in 1974 but their repertoire contained far more than 1970s country-pop. For the real Daredevils go back a year to their debut, eponymously titled, album. ‘The Quilt Album’, as it became known, is classic Americana because it takes country-rock as in The Byrds and the Flying Burrito Brothers not to Nashville but deep into to the real roots of their Missouri home.

For this reviewer ‘The Quilt Album‘ isn’t just a classic Americana album, it has been a constant companion for over 45 years. Opener ‘Country Girl’, a song of pure joy, says it all. Downhome lyrics and Steve Cash’s harp blends the Daredevils’ signature country-rock and electric bluegrass with harmonies to create a sound as uplifting as the sun rising over those Ozark mountains.

In 1971 “a ragtag collection of hippies, bohemians, and musicians of no fixed ambition” living in Springfield, Missouri formed the magnificently named Cosmic Corncob & His Amazing Ozark Mountain Daredevils. Their break came when, as The Ozark Mountain Daredevils, performing at the Cowtown Ballroom, Kansas City a certain Glyn Johns was in the audience. Having recently produced ‘Desperado’ by The Eagles he was on the lookout for a uniquely American sound. The Daredevils were perfect. Johns signed them up to A&M, helped choose the songs for an album then flew them over to London, England to record. The result was ‘The Ozark Mountain Daredevils’.

‘Spaceship Orion’ and ‘Colorado Song’ are very much of their day and the latter’s huge crescendo of rock and big harmonies bore the mark of Johns’ production. Likewise, ‘Road to Glory’ builds up from a very west coast country rock sound into full-blown orchestral strings. Fine stuff but where the Daredevils really get interesting is when their unique hillbilly style dominates.

Most notable is ‘If You Wanna Get to Heaven’. Cash leads with his harp as the Daredevils belt out their first hit song, “If you wanna get to heaven you’ve got to raise a little hell”. ‘Black Sky’, is a pulsating reminder that however fast you want to live, the rhythm of the country never changes. ‘Standin’ on the Rock’ is simpler still, “I been standin’ on the rock waiting for my seeds to grow”. But jump on board the ‘Chicken Train’ and be carried far away from 1970s country rock to a timeless piece of roots music.  Cash’s harp and the eerie twang of John Dillon’s mouthbow are as vivid as “laser beams in my dreams”.

The final track sums up the Daredevils’ country hippy ideal. The washboard, country acoustic strumming and harp of ‘Beauty in the River’ burble with bucolic optimism, “it don’t matter what is said/ we can wake up from the dead and roll away the stone”.

The four albums they made in the 1970s defined the Ozark Mountain Daredevils. After that innumerable line-up changes and a desire among the founders to stay in Missouri meant little of recording significance. The Daredevils are still going though. Very sadly Cash died last year but the two other founders, Dillon, and bassist, Michael Granda with various friends still play the old faves in Springfield, Mo.