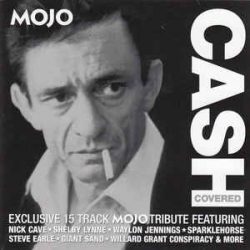 Johnny Cash had a career that would take a very large book or two to encapsulate and this Mojo sampler from 2004 offers 15 tracks that only represent the briefest overview with a variety of disparate artists offering their takes on the man’s work.  It is a good selection though and worth a listen; the cover versions fascinate in the way the somehow do.

Michelle Shocked kicks things off with the infectious, ‘One Piece at a Time’, which first appeared on the similarly named Cash album of 1976. It’s higher tempo, doesn’t vary much from the original and is a brilliant lyric, courtesy of Wayne Kemp, guaranteed to raise a smile. Check out the finished product and the original Cash song on the following YouTube clip

Waylon Jennings and Steve Earle cover the bad boy section with their versions of ‘Folsom Prison Blues‘ and ‘Hardin Wouldn’t Run‘, both Cash originals. Jennings provides a fair facsimile of a Cash vocal and the song in its quiet way, ‘Shot a man in Reno / Just to Watch Him Die’ is as outrageous as any gangsta rap. Cash’s lyrics to ‘Hardin’ are not the best he ever penned and Earle sings, in typical fashion, the tale of a killer and teller of tall tales.

The wonderful John Hurt, the singer not actor, covers Lead Belly’s ‘Goodnight Irene’, and nothing he sings can sound anything other than inimitable. It’s a timely reminder of the place the blues plays in so much Americana. Robbie Fulks and Jeb Loy Nichols cover ‘Cry Cry Cry‘ and ‘Worried Man’ respectively. ‘Cry’s‘ use of thumping bass and a honky-tonk vibe echo the original. Nichol’s version of ‘Worried Man‘ utilises a very distinctive softly spoken vocal with a distinct reggae feel to its shuffling beat – very effective it is too and unavailable elsewhere.

Sparklehorse provide their distinctive sound on Merle Travis’s ‘Dark as a Dungeon‘, with a treated vocal, violin and what seems to be an attempt to replicate scratched vinyl. Without casting a yea or nay it can at least be said to be atmospheric. The Willard Grant Conspiracy lead us to church with an unidentified keyboard on ‘I Still Miss Someone‘ – another exclusive recording for the album and redolent of the religious aspects of Cash’s work.  The Lord often lurks in the background, for good or bad.Nick Cave brings his special brand of minimalistic gloom and space to a track originally entitled ‘The Folk Singer’, but in this incarnation with slightly altered lyrics and no ‘Folk‘ in the title.

The album divides unsurprisingly into 2 with those who bring their specific sound and those who stick close to the originals – as does Shelby Lynne in her version of ‘I Walk the Line‘, clearly one of Cash’s most famous and best-realised lyrics. What is notable in this version is a nice mid-song guitar break. Another classic ‘Ring of Fire’ gets a ska/bluebeat treatment from This Kid Named Miles, which is in great contrast to the rockabilly ‘Get Rhythm‘ from Jawbone echoing the liveliness of the opening track. It’s a real foot-tapper. Knife in the Water produce a relaxed take on ‘When the Man Comes Around‘, with a half-spoken intro – another exclusive recording.

Penultimate track from Tom Russell is ‘The Ballad of Ira Hayes’, and reveals a side of Cash relating to his 1964 album ‘Bitter Tears‘. Partly in deference to what he believed to be his Native American roots he produced a concept album (there weren’t many of these in 1964) about the plight of the First Nations. A number of tracks including this one were written by Pete La Farge  – it was something of a collaboration and not all that well-received.  Cash, on the 22nd of August 1964, took out a full-page advert in Billboard calling out DJ’s and programmers for not playing the Hayes song. Although the album and singles from it were an eventual success it was not warmly received by a significant number of people. Hats off to Mr Cash for grasping that particular nettle.

Russell has embellished his tribute and included some spoken word tributes to a chief called Bacon Rind who came to light in a petrol station as part of a giveaway promotion and Chief Seattle’s comments on comparisons between the religions of European settlers and Native Americans. These precede and augment Russell’s version of the ballad.

Proceeding are rounded off by Giant Sand with a version of ‘Wayfaring Stranger‘, including an additional and effective soupçon of ‘Fly Me to the Moon‘. This track seems to be credited to Cash / Howard on the album but is commonly held to be a traditional song. Whispered vocals, heavenly female choruses and a splash of jazz-inflected piano serve the song well.

Nothing can compare to the monthly playlists available to Americana UK subscribers but Mojo’s free CD’s can often be excellent listening and this is one. It divides between those who choose the path of replication and those who provide a little extra in terms of content or their distinct musical approach – Nick Cave and Tom Russell being two good examples of the latter. There’s even a bit of reggae and bluebeat/ska in there to add to the fun.