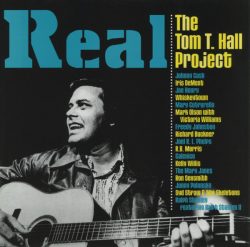 There are musical moments in your life that are of such significance that you will remember them forever. I recall buying my first record, going to my first gig and lying in bed as a 15-year-old listening to John Peel play ‘New Rose’ by The Damned. I wish that I could similarly pinpoint the first time that I heard Tom T Hall, but alas, I can’t. He just seemed to always be there, occasionally referenced by artists or in the media whenever the conversation turned to great songwriters. Then in 1998, by which time my affection for Dave Vanian, Rat Scabies and Captain Sensible had long since waned, a tribute album was released – ‘Real: The Tom T Hall Project’.

The collection got great reviews. No Depression even described it as “among the most revelatory tribute records made this decade”. It was time for some serious investigation. A look at the artists involved revealed the names of Johnny Cash, Richard Buckner, Iris DeMent, Calexico and Mark Olson & Victoria Williams. The penultimate track sealed the deal. Who could possibly resist the temptation of Whiskeytown doing a song called ‘I Hope It Rains At My Funeral’?

On listening to the record, the first thing that strikes you is the richness and variety of the songs. Hall is equally comfortable using warmth, wit, comedy, tragedy and just about any other sentiment or emotion that you care to mention. The astute matching of artists to songs also contributes greatly to making this compilation work as both a showcase for Hall’s songs, but also a vehicle for the artists themselves.

The album kicks off with ‘I Washed My Face in the Morning Dew’ a song that is perfect for Johnny Cash with it’s opening line “The first strange town I was ever in/the county were hanging a man”. The song goes on to outline a series of injustices before the final verse hopes that “someday things are bound to change/it can’t be too far”. The recording features just voice and guitar giving clarity to Hall’s lyrics. It’s one of many highlights on the album. Ron Sexsmith’s fragile handling of ‘Ships Go Out’, Richard Buckner’s stripped-down ‘When Love is Gone’ and Mark Olson & Victoria Williams’ equally sparse ‘It Sure Can Get Cold in Des Moines’ all show respect to the songs whilst at the same time placing the artists’ own individual stamp on them. Each one works perfectly.

Iris DeMent adds an astringent tone to ‘I Miss A Lot Of Trains’, whilst Whiskeytown capture perfectly the dark humour of ‘I Hope It Rains At My Funeral’, all tremendous stuff. However, for me, amongst all this gold, there are two diamonds. Firstly Calexico take the jaunty country swagger of  Hall’s ‘Tulsa Telephone Book’ and reinvent it as a dark, desperate and agonising expression of lost love played out to an eerie mariachi musical accompaniment. Syd Straw & the Skeletons’ inject genuine fury and indignation into ‘Harper Valley PTA’, Hall’s tale of small-town conservatism and hypocrisy. Straw’s delivery is so convincing that it sounds personal.

Contributions from Kelly Willis, Ralph Stanley, The Mary Janes and Joe Henry are also worthy of their inclusion. However, it would be fraudulent to suggest that all the tracks hit the mark. Jonny Polonsky’s flat rendition of Hall’s ‘Old Enough To Want To (Fool Enough To Try)’ sucks the warmth and sensitivity out of the song, whilst Mary Cutrufello’s over-expressive vocal tramples over the subtlety of ‘Candy in the Window’.

Despite the inevitable odd duff track, ‘Real: The Tom T Hall Project’ is a wonderful collection of songs and performances that opened up this writer to the genius of Tom T Hall. Listening to it again I was struck by its enduring quality. A ‘classic’ compilation for sure.