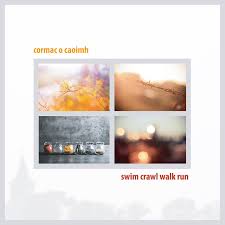 It’s the fifth time back to the well for Cork’s O Caoimh and his folk-based pop. His previous release built upon a growing reputation and this one should continue the upward trajectory containing as it does some very savvy pop songs, carefully produced and deftly performed. ‘When My Kids Grow Too Old To Hold Hands’ is particularly affecting with its shiny folk stylings and clear depiction of the innocent joy of childhood. Digging deeper we hear Badly Drawn Boy in ‘You Won’t Break Me’ and ‘Desire Lines’ but this is not plagiarism more a flavour and the latter track turns left as the strings come in and we have a plangent, melancholic coda that is a bittersweet delight.

Perhaps the only misstep is the title track ‘Swim, Crawl, Walk, Run’ which feels almost experimental when compared to the mood of the rest of the album. The production is fabulous with its layers of sound but the song itself feels lightweight. ‘Pockets of Doodlings V2’ returns to the original template and it all the better for it. Sharp lyricism with melodies to match and a gentle but beautiful production. In fact the second half of the album is even stronger featuring the aforementioned and four more killer tracks all hewn from the classic songwriters book that O’Caoimh clearly subscribes to. In reviewing his previous album this reviewer postulated as to whether it was the one to ‘breakthrough’ for him – in the end it didn’t but this one has just as much chance as the quality is the same. Maybe it’s his time now. Let’s hope so!