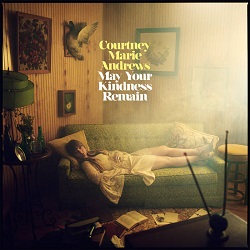 The opener, and title track, features a powerhouse vocal delivery over a backing that features more than a hint of gospel, and sees Courtney Marie Andrews wishing luck at holding onto true values to those whom the American Dream has passed by. So to the barroom drunk “blowing your paycheck away on over priced booze” and the ageing beauty queen “wearing loneliness as a costume” there is the glimmering wish that “if your money runs out and your good looks fade may your kindness remain”. There’s a sense of fatalism to the rocking honkey-tonkeyisms of ‘Two Cold Nights in Buffalo’, as the snow closes in and only the cheap motels are open “El Nino brought a blizzard / Greyhound brought a boy”.  It’s a short lived affair, with little glamour adhering to it, and it mirrors the economical low that the city has been brought to “What happened to the middle class / mom and pop five and dimes ?”.  Everything one thought could be relied upon to last is going, withering in the face of a corporate blandisation that builds to be erased.

There’s a side turn into a downbeat ballad on ‘Rough Around the Edges’, on which Andrews is hard on herself and her failings – not for her the ability to see “the beauty in simple things – in desert sunsets and in movie scenes”.  There’s a richness to these songs, ‘Kindness of Strangers’ country rocks like a Manassas ballad, there’s a nice sharpness to the guitar playing on this track which blends well with another bleak set of lyrics dwelling on individual experiences of falling apart and also the loss of societal cohesion. The strident ‘I’ve Hurt Worse’ initially comes across as a celebration of a relationship of equals “I like you honey when I argue you argue back / I like you honey because you don’t hold the door” but soon unravels into a form of hopeless dependency which also carries a dig at a larger target “I like you honey even when I’m feeling used / I like you honey you tell lies in the form of truths / I like you honey even when you don’t come home / I like you honey being with you is like being alone”.  It’s a good example of how ‘May Your Kindness Remain’ is an album working on several levels – the songs can be taken as just personal tales of woe, but they are also sprinkled through with layers of political comment. Overall, despite being a bleaker listen, it’s an album that’s as worth hearing as ‘Honest Life’, being both more musically varied and offering a battered, but not battered down, maturity of lyrics.

Courtney Marie Andrews cements her position as a break-out Americana artist of note.