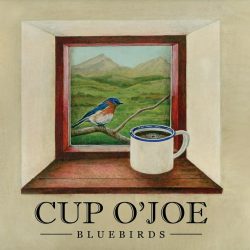 You can be forgiven for not having heard of Cup ‘O Joe before. A gypsy-folk and bluegrass trio from Northern Ireland are as far from mainstream consciousness as you’d expect, but that isn’t such a bad thing, because it allows them to continue on with their gorgeous blend of gentle bluegrass picking, beautiful folk melodies and mellow harmonies throughout Bluebirds, this fantastic EP.

It starts with the title track Bluebirds which immediately shows just how much these three musicians have to contribute. The male vocals and harmonies of Reuben and Benjamin Agnew blend beautifully, and the picking of all three, with Reuben on guitar and mandolin, Benjamin on upright bass, and sister Tabitha on banjo and fiddle are as rootsy as it comes, to their huge credit.

Tabitha gets her chance to shine with her beautiful vocals dominating on Pretty Fair Maid. This pushes against the boundaries of traditional folk music, telling a traditional tale of a love going to war, with a gorgeous Irish lilt in the vocals and a fantastic backing of banjo, guitar and bass. The balance between the instrumentals and the vocals is superb, and is really a joy to listen to.

After the extended instrumental track of Blackwaterfoot the impressive vocal performances continue in Homesick, where we see a continuation of the vocal harmonies between this impressive trio. This track is more banjo-dominated, creating a lovely upbeat tempo, somewhat in contrast to other tracks such as Bluebird and Pretty Fair Maid.

Tabitha stars again in Tell Me Darling, showing her diversity with more of an upbeat performance. This is less folk than Pretty Fair Maid and more of a raw Americana performance, with a sparser guitar-dominated backing. Tabitha’s vocals are never going to escape too far from a folk performance, but Tell Me Darling does show the diversity in musicality in both writing, backing and performance that Cup ‘O Joe display.

Black Coffee is the most diverse of tracks, and wouldn’t be out-of-place in a Chicago speakeasy. It sounds much like an authentic jazz track, with the upright bass strumming a prominent rhythm and Tabitha delivering a great laid-back swing performance. The backing is still the acoustic roots that we are used to, but with a much looser feel, delivering the great jazz swing.

A gorgeous folk EP from a family-trio from Co Armagh, Northern Ireland.