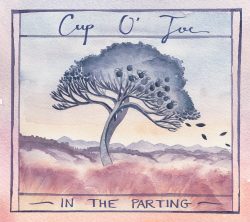 Across the great fountain of knowledge we know and love as the World Wide Web there are simply dozens of possible explanations offered for the origins of the expression ‘Cup O’Joe’, which, as all dear readers will know, is slang for coffee. Well, actually this reviewer didn’t. Not sure why, just never came across this particular example of slang, hence the consequent delving into Google’s famous rabbit holes. Possible choices include being named after Josephus Daniels, the Secretary of the US Navy who abolished the officers’ wine mess on board ships in 1914, or perhaps it derived simply by being the chosen beverage of the common man, the ‘joe’. Anyhoo, it has also been assumed by a talented trio of siblings from County Armagh and ‘In The Parting’ is their debut full-length album.

Tabitha (5 string banjo), Benjamin (bass) and Reuben (guitar) Agnew have produced a (mostly) bluegrass album of ten tracks, including one traditional and nine original songs. The one traditional song – ‘In Praise of the Glen’ listed elsewhere as the title track, which is a little confusing! – opens the album and this interpretation starts as a standard Irish ballad and ends at full bluegrass pace. Guitar, banjo and fiddle all adeptly played, along with a first exposure to delightfully tight sibling vocal harmonies, a feature of the album. ‘The Waiting Game’ is a bright country track, once again driven along with guitar, banjo, mandolin and fiddle….what you might call foot-tappin’. The sole instrumental, ‘Pinley Green’, strongly features the gang-of-four of bluegrass instruments once again, and at this point mention should be made of David Benedict (mandolin) and Niall Murphy (fiddle) for their fine contribution here and on other tracks.

‘Till I Met You’ is a love song presented in traditional style, but which feels fresh and is testament to a promising songwriting future. ‘Why’ has a Union Station feel, particularly the excellent harmonies, almost ‘Dustbowl Children’ in delivery, and again showcases the group’s instrumental skill and virtuosity. ‘Run Run’ is very radio-friendly, well-paced with interesting key changes and unexpected ending of lines. Jazz-influenced, guitar style of perhaps Peter White, and hearing the ‘nap sack’ referenced in the lyric was an additional and unforeseen joy….

The albums ends on a gently humorous nod to the group’s moniker with ‘Can’t Sleep Without Caffeine’, a swing induced number, which…ahem…swings along and brings this very competent debut to a close. A couple of tracks don’t perhaps stand out as much as others but ‘In the Parting’ is a very enjoyable listen, with skilful harmonies and accomplished playing of bluegrass throughout. Enjoy.

Grab a cup of your favourite coffee, kick back and enjoy