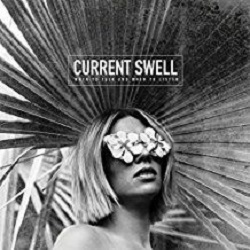 Already quite a big thing in Canada, Current Swell decamped to Nashville to record part of this latest album, with the remainder being finished at home in Vancouver. It’s their sixth full-length release, coming twelve years after their debut So I Say; these guys are clearly in it for the long haul. The four-piece band revolves around their songwriting hub of Scott Stanton and Dave Lang.

It’s a difficult record to assess. The band are clearly fashioned from and influenced by a Kings of Leon-ish /AOR style (hence perhaps the employment of former KOL producer Jacquire King in the producer’s chair for this release). There are strong flavours of nu-folk in there too, songs such as Like I Fight For You have echoes of the dismal Mumford and Sons and their ilk. It has to be said though that Current Swell are a significantly better band than Mumford and Sons.

The songs often come from very personal places, such as bereavement (Marsha), childbirth (title track When To Talk And When To Listen) and lost loves. The sincerity of the writers cannot be doubted, but the musical realisation is often a little uninspiring. It’s exceptionally well played and slickly produced – there’s tonnes of commercial appeal and it’s not a chore to listen to. There’s undoubtedly a big market in North America for this brand of roots-ish, blue-ish collar rock. It’s all just a bit too safe though.