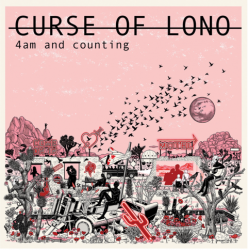 Curse Of Lono are back with another emotional roller coaster, straight off the back of last year’s breakthrough album ‘As I Fell’. The only difference is that this time the skin is off. ‘4am And Counting’ was recorded uncut, live on to tape at Toe Rag Studios, produced by Liam Watson (White Stripes), mixed by Oli Baysdon (Boxed In) and featuring special guests, pedal steel star BJ Cole and harmonica player Nick Reynolds (Alabama 3).

The London five-piece have swept into 2019 on the back of their aforementioned second album, picking up the Bob Harris Emerging Artist of the Year at the UK Americana Awards Ceremony along the way. ‘4am‘ is a stripped back version of songs from this, and debut album, ‘Severed’. Followers of singer/songwriter Felix Bechtolsheimer will be familiar with the format from his days as Hey Negrita frontman and the “live acoustic smokeout” that was ‘Burn The Whole Place Down’. But this is a different beast. The musical maturity that the years have lent this huge personality have made their presence felt on the worldwide arena to the extent where CofL now share the stage with the likes of Steve Earle and are a multi-award winning act for their film, as well as musical work.

For all his so-called dark humours, and yes, he has used music to cauterise a grim period in his life, most of the Bechtolsheimer subject matter is focused around dreams and aspiration. ‘4am’ begins with a gift dedicated to his grandfather. ‘Tell Me About Your Love’ is a slow groove that tells the story of memories that never die and staring death in the face with impunity. It rolls along, with old time drum partner Neil Findlay still around and still driving the beat. Bassist Charis Anderson is also more to the front of the mix, with her supporting vocals prominent. Joe Hazell (guitars and vocals) and Dani Luiz Hernandez (keys and vocals) make up CofL. Each track is given the late night jam treatment, shot through and hung out to dry until they bleed bittersweet frontier soundscapes. And the space of the production has that desolate impression of a modern day Doors . The material might be familiar (a cover of Tom Waites’ ‘Goin’ Out West the only track not from either album), but the approach is fresh, the production rich, and this record echoes as though it was recorded not just at 4am but in the middle of the Grand Canyon. Speaking to AUK earlier Bechtolscheimer was not so sure:

“This whole album was a bit of an accident. We just wanted to shoot a video for a couple of chilled-out versions of our songs but the whole thing just snowballed and the next thing we knew, we had fifteen tracks recorded. We only wanted to do a limited edition vinyl for Record Store Day as we were really nervous that people wouldn’t see the point in a third record in three years when there aren’t even any new songs on it but it got so much attention that we allowed ourselves to be convinced to put it out properly. So far the reaction has been great but I’m still a bit nervous about what people will make of it.”

At this point, a shout out should be made for the album artwork by Stuart Patience. It’s a hellish western desert scene, another visual checkpoint to the sweeping effect of the whole (check it out). Of the featured tracks, suffice to say the reworked version of ‘Way To Mars’ could’ve been the lead single from ‘Exile On Main Street’, it really is that good with Felix’s menacingly reflective sneer augmented by Cole and Reynolds, who add a new dimension.‘Welcome Home’ addresses the same bittersweet relationship tribulations as the more contemplative moments of Chas ‘n’ Dave. They’re no novelty act, but Bechtolsheimer sometimes utilises the same tongue in cheek approach of the rockney duo to great effect, admittedly in a darker hue. And there’s more than a hint of the late, great Chas Hodges in the way CofL really swing when the mood takes. Singles ‘London Rain’ and ‘Valentine’ are both here and both about as different from the originals as it’s possible to be without rewriting them.

The sense of infinity captured inside this magnificently intimate London studio onto analogue tape can dispel any fears that CofL had that they were merely reheating leftovers. The uplifting encore of ‘Pick Up The Pieces’ is there at the tail end of the album with Joe Hazell on fantasticly bluesy form running up and down the fretboard, with ‘Don’t Look Down’ seeing the sun finally rise on ‘4am And Counting’, BJ Cole providing a shimmering pedal steel. Reverend Neil Findlay slows the tempo down to a sleepy climax, and Curse Of Lono show once again why they are among the UK’s premier americana bands.

Crime, punishment and redemption from the London five-piece with unlimited horizons