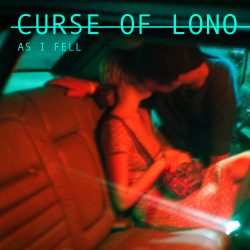 Although last year’s acclaimed ‘Severed’ was the first album to appear under the Curse Of Lono monicker, frontman Felix Bechtolsheimer points out that this terrific new album in some ways represents a proper debut for the band, given that ‘Severed’ was essentially put together by Felix and producer Oli Bayston, whereas this impressive collection was licked into shape by the whole band plus Boyston at a remote desert studio in Joshua Tree after extensive rehearsals and preparation at Flesh & Bone Studios in Hackney.

Their blend of harmony-laden Americana and moody alt-rock, not unreasonably described as cinematic and inevitably compared to the venerable likes of The Doors and The Velvet Underground as well as more modern practitioners of the form such as The War On Drugs and Wilco, is refined and expanded here to memorable effect by a cohesive and committed band including Joe Hazell (lead guitar and vocals), Dani Ruiz Hernandez (keys and vocals), Charis Anderson (bass and vocals) and Neil Findlay (drums).

Lead track ‘Valentine’ serves notice that the listener is about to venture into murky and potentially treacherous territory, being, as Felix says, “about the kind of murderous jealousy that twists you up until you don’t recognise yourself anymore,” including such regrettable fantasies as “a dagger for your lover’s heart.”

At the other end of the album, the string-laden ‘Leuven’ recalls the stories Felix’s grandfather told him about growing up as a half-Jew in Nazi Germany and a devastating train crash he survived in 1954 after the first football international between England and West Germany after World War 2.

Nor is it exactly fluffy kids’ stuff in between, despite a conscious attempt to close the door on the heroin-related material that has inspired much of Felix’s previous work, for instance with UK Americana pioneers Hey Negrita. ‘As I Fell’ does include a couple of old songs that have patiently waited their turn, including ‘And It Shows,’ the first song Felix wrote after he gave up heroin and methadone. “The only thing I had to cling to were the songs that kept pouring out,” he recalls of those dark and death-filled days. “Despite my desperate attempts not to go back there, this song wouldn’t leave me alone and eventually I backed down and gave it another chance. I’m glad I did. It’s a time capsule.” Yet despite it all, this is not a doomy, dour or depressing collection but a defiant and admirably adult one, shining a light into the darkness in search of hope and dreams.