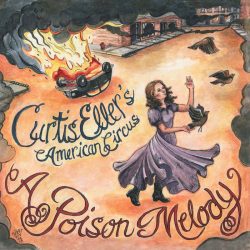 Curtis Eller is a dynamic bandleader and banjo player who channels a great sense of vaudevillian Victorians to his idiosyncratic musical vision. Opening with ‘Radiation Poison‘, Eller sets the tone by throwing the kitchen sink at the song – shouted choruses, wild horns and above all a driving banjo that set the concerned lyrics into sharp relief. ‘No Soap Radio’ follows – this time driven by a scuzzy, wailing saxophone and a guitar riff as old as rock and roll itself.

This is wild stuff, the sort of thing you would stumble upon in a tent in a back field at Glastonbury, populated by outsiders making music for themselves and somehow inviting you into their glorious hedonism. It is ribald and righteous. And then…‘Poison Melody’ changes the focus. Gently strummed banjo and delicate harmonies, yet still infused with a sense foreboding as Eller’s voice is not quite gentle enough and the harmonies not quite delicate enough. Even the falsetto at the end does not remove the sense of an old-time showman hypnotising a crowd – beguiling and somehow unnerving.

‘Lenny Bruce‘ is similarly affecting and unnerving whilst ‘After the Riot‘ is both relevant and arresting. And this is Eller and his crack band of musicians’ modus operandi – they are the fiddlers as the empire burns – chroniclers of the blacker edges of society through their driving lyricism, spiky horns and feverishly strummed instruments. The album veers this way and that, sampling rock and roll touchstones as well as more cabaret style numbers but always retains a joyous energy as well as a sense of spite. They must be a fantastic live act.

Vaudeville Americana - banjos, choruses and a dose of cabaret!