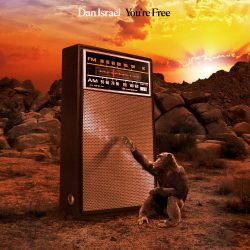 Dan Israel is going for it. After 13 albums as a part-timer Israel quit his Minnesota day job to concentrate fully on his music. So, probably not a coincidence that his first subsequent release is entitled ‘You’re Free’ and, as the excellent title track says “And all of the sky’s the limit now/Time to make good on your freedom vow/Promised yourself that someday you’d finally flee, so flee.” It is a joyful guitar driven celebration of this new found artistic freedom, years of confinement blown away in a song.

Israel has not ventured along this road alone, surrounding himself with no less than eleven supporting artists on the album including his fellow producers David J. Russ and Rich Mattson. Israel leads the line with a rich, deep and expressive baritone that sits equally as well with the slower, folksier numbers as on the electric guitar driven rockers. This combination of rich voice alongside perfectly matching accompaniment is perhaps best demonstrated on ‘If I Didn’t Have You’, a beautiful mid-paced ballad with some catchy acoustic guitar licks, the heavenly backing vocals of Katie Gearty and some weird and wonderful sounds that may or may not emanate from Russ’s lap steel.

With a great demonstration of how to sequence an album, the next track, ‘Stay On The Run’, complements its predecessor perfectly. A pared back sound featuring only Israel on vocals and acoustic guitar with Mattson joining him here on, what is rather harshly described on the album credits as, “shitty piano”. It isn’t, and it brings touch of melancholy to the quietest track on the album.

Israel has cited Dylan and Tom Petty amongst his musical influences and Petty’s stamp is all over the far too short ‘Someday You’ll Say’. Of the up-tempo electric guitar driven tracks that comprise the bulk of the album this sits alongside the title track as a highlight. Other songs don’t quite hit these same heights but, nevertheless, Israel has demonstrated more than enough promise on this album to suggest that his decision to make music his full-time passion will be a fruitful one.