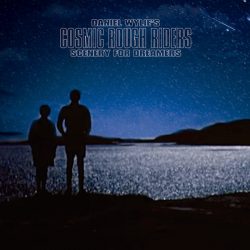 There’s a track on this fabulously rocking album that reminds me of the day I went round to Crusty Nick’s house to get my piercings done. Before you could say abracadabra, he’d installed an Apadravya and a Prince Albert, (as a tribute to the great man, after watching the TV series Victoria), plus the obligatory nipple rings, with a length of chain connecting the two. Nick said “you’ll be the jingle jangle man when I’m finished with ya’.” He wasn’t wrong. Sowhen Daniel Wylie asks ‘Where is the jingle jangle morning?’ on the Neil Young-meets-the-Flaming-Groovies-on-a-wild-night-out sounding ‘Jingle Jangle Morning’, I can tell him: right here, mate. Every bleeding morning there’s a jingle jangle now. Or at least there will be after I get the chain untangled from my chest hair.
Daniel Wylie has been making music for a wee while: he formed Cosmic Rough Riders in 1999.  Wylie hooked up with some other guys for an audition for Alan McGee’s Poptones label, got signed up and the band enjoyed chart success. Daniel left the band he had created in 2002 because he wanted to be the sole songwriter, but following their demise in 2006, he has since resurrected the name, hence Daniel Wylie’s Cosmic Rough Riders. On Scenery For Dreamers he has hooked up with his old mucker Johnny Smillie from Thrum, who co-produces; as well as Neil Sturgeon from TheGoldenhours and Jim McCulloch from Green Peppers. These guys know how to kick ass.

Daniel’s dad used to run a record stall in Glasgow, with Daniel helping out on Saturdays, when he would take his wages in albums. His love of bands like the Byrds, Beach Boys, Elvis Costello, Aztec Camera, and Orange Juice, erupts from Dan’s psyche and can be detected throughout. Though Wylie does not forget his enormous love for soul music, and the debt he also owes to artists like the Chi-Lites, Detroit Spinners and Chairman of the Board.

If Neil Young’s guitar sound circa Cortez The Killer and Driftin’ Back tickles your fancy, you are going to be tickled as pink as a Wild Alaskan salmon when you hear Cold Alaska. Wylie knocks it out of the park with a floor-shaking, booty-slapping rocker that conjures up escapist visions of a promised land where life is lived half the year below zero; one of the last unspoiled places on our polluted planet, with its:

‘blue sky, clearer air, no shopping malls, no silicon valley, no bowling alley, there’s nothing here… so much space out there: INFINITY!’

Apart from making me rock out with my favourite air guitar, (it’s a 1953 Gibson Les Paul, obvs!) Cold Alaska makes me think of that brilliant T.C Boyle novel Drop City set in 1970 about a bunch of hippies who try to establish a commune out in its frozen wilderness. Spoiler alert! Unlike in Daniel’s world of Cosmic Rough Riders – it doesn’t end well for the freaks!

If Daniel had to create a catchphrase for his logo, it might trumpet Melody is King, as his favourite modus operandi is creating either “chiming guitar pop with harmonies and hooks,” or “melodic, acoustic, melancholia.” “Scenery ForDreamers” favours both such approaches on this album to powerful effect.

Perhaps, like Daniel, I should have opted for the less painful pleasures of the 12-String Rickenbaker when it comes to the old jingle jangle.

Prince Buster would approve: dreamers everywhere will be digging the Rough Riders far out scene