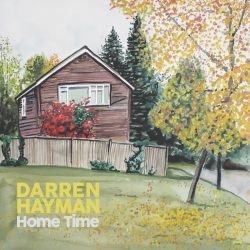 Darren Hayman’s ‘Home Time’ is music that is likely to divide. For some it will be light and mannered with an ironic pose. For others it will be playful, charming and endearing. This reviewer sits in the latter camp. Mainly. ‘Home Time’ has a lo-fi indie-pop sound, with precursors including acts such as Violent Femmes and Jonathan Richman and the Modern Lovers. If you have these acts in your playlist along with They Might be Giants, you’ll enter Hayman’s abode with ease.

The album tells the story of a couple’s break up covering drunkenness, self-reproach and the practical mundanity of closing a joint account. Hayman set himself the challenge of recording all of the songs on an 8 track. This, along with his unforced singing, gives the material the air of demos and first drafts. The songs are simple, short and lifted by catchy poppy melodies in the background vocals.

However, it becomes a disorientating listen. There is a disjunct between the naive style and the subject. When Hayman sings “I am exhausting you / You are exhausting me”, he sounds well, just a little bit tired. ‘I Want to Get Drunk’ has little sense of the need to use alcohol to sedate. ‘I Tried and I Tried and I Tried and I Failed’, sounds more like someone who is a bit put out than self-laceration. It is as if P.G.Wodehouse had written a novel about a doomed adulterous love affair. It would be good, but you would be bewildered throughout.

This dissonance increases throughout the 11 songs. By the end you long for pieces that convey the emotions that go with loss of a love. Bleeding steaks of heartbreak like Krauss’s ‘Dimming of the Day’; Costello’s ‘Indoor Fireworks’; Dylan’s ‘You’re a Big Girl Now’.

Hayman’s work is more an amuse-bouche compared to these, and the comparisons wouldn’t arrive where it not for the topic. There is a real skill in producing something light and delightful, but when you are expecting a full meal, a series of starters may leave you dissatisfied.

Bouncy poppy melodies that sit uneasily with their subject