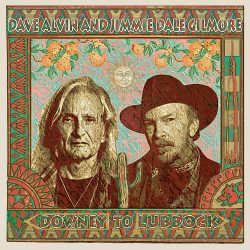 Dave Alvin and Jimmie Dale Gilmore have been scene buddies for 30 years, but never recorded together until now. Whilst joint headlining recently they realised the chemistry, and decided they had to get something down, resulting in an album of history sweeping covers and two originals. Alvin started in The Blasters, Gilmore in The Flatliners, but they are now both touring troubadour senior citizens, performing their tales of the new and old west with huge energy and love for their craft, and much respect for each other.

Through rearranged traditionals such as ‘KC Moan,’ to Lightnin’ Hopkins and Woody Guthrie covers, the pair alternate verses and guitar licks, with Alvin’s reverb Strat solos never far away. It is the co-writes however that really stand out. ‘Billy The Kid & Geronimo’ imagines an alternate history where the two meet before their ends, swapping their stories and contemplating injustice, morality and their place in history. The part-Cherokee Gilmore takes the part you would expect.  From the myths of the old west to one of the new, where the pair self-mythologise on stand out and title track, ‘Downey To Lubbock.’ The opening evocative chord sets us straight into a dusty empty west which is what the thousand miles of Arizona/New Mexico desert between the two towns essentially is. Downey is Alvin’s California origin, Lubbock Gilmore’s Texan home, and the two alternate verses journeying in the opposite direction telling us the stories of their careers. As they have hinted in interview, there will be more like this to come, neither veteran ready to hang up boots yet.

Not yet hoary compadres.