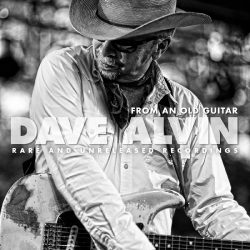 The front cover’s black and white Dave Alvin playing his road-worn 1964 Fender Stratocaster, pretty much sets the tone for this round up of his songs that have escaped general release until now. On his Bandcamp page Alvin says “There are two types of folk music: quiet folk music and loud folk music. I play both.” The first song ‘Link of Chain’ is a pretty good example of his “loud” folk music, and not untypical of a Dave Alvin song. Following this however is his take on ‘Highway 61 Revisited‘. Originally recorded for Uncut Magazine’s ‘Highway 61 Revisited – Revisited’ compilation in 2005, if you missed it then, it is one of the must-hear songs of 2020. Alvin transforms Dylan’s song into the primaeval blues that was always there in the lyrics. The sparse backing, mostly bass and drums brings a menace to Alvin’s spoken delivery of the words that any Mississippi bluesman would have been proud of.

There seem to be a couple of versions of the running order on different formats of the album, in fact one of the few criticisms of it is that the running order as presented here is a bit all over the place. Next on the version AUK were sent is ‘Perdido Street Blues’. A sharp contrast to the electric songs that precede it, the old-timey arrangement fits well, however. The old guitar this time is Alvin’s 1934 National Steel Duolian. With a distant piano and lap steel guitar, this could be straight out of 1947. The other instrumental on the album is ‘(Variations on Earl Hooker’s) Guitar Rhumba’, where the lead is taken by accordion, harmonica and piano, as well as slide guitar. it’s a fun jaunty piece that punctuates the middle of the album.

Relatively few of the songs here were written by Alvin. The reflective version of Bill Morrissey’s ‘Inside’ contrasts with Willie Dixon’s ‘Peace’, a straight Blues that was a download-only single in 2007. Marty Robbins ‘Man Walks Among Us’ was a song Alvin discussed in a blog from some years back called “10 Songs I Wish I had Written”, so maybe no surprise to find it here in a version not a million miles from Robbins own. The final song on the album is an Alvin original ‘Beautiful City ’Cross the River’ that previously appeared on the expanded digital edition of ‘Eleven, Eleven’. The other album highlight, in an album full of highlights, not mentioned is ‘Mobile Blue’ where Micky Newbury’s country song is given a brilliant backwards guitar intro from Bill Frisell that energises the entire band to Frisell style solos and fills.

Alvin says that most of the songs here were recorded for “the sheer kicks of going into a recording studio to make some joyous noise with musicians and singers that I love and admire”. If you have been an Alvin fan for some time then you will have at least some of the material available here, but despite the various recording times and personnel this is an album, a body of work that stands up in its own right, and could easily be one of the best of his career. If you are a casual fan or new to Dave Alvin, then this is an album you need to own.