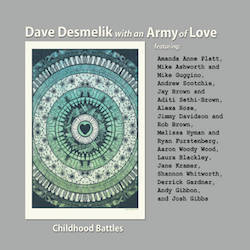 As a music reviewer, one strives to approach each release dispassionately. However, on occasion it is nigh on impossible to separate an album from the story behind it. This is one such record. First, the personnel: Dave Desmelik is the journeyman songwriter and musician who has written and recorded all the material herein. The songs feature a stellar line-up of musicians from western North Carolina including representatives from such acts as The Honeycutters, The Steep Canyon Rangers and The Worthless Son-in-Laws to name but a few. The playing is first-rate throughout; the arrangements lend a sympathetic accompaniment to the album’s songs and help to make this an eminently listenable suite as opposed to it simply being a statement.

Now, the story: Desmelik and his wife Clare have two sons. The eldest, Holmes, was diagnosed with an inoperable brain tumour at age five in June 2014. The collection of songs on ‘Childhood Battles’ revolves around paediatric illness and covers a wide range of topics concerning illness, treatment and suffering. It may be difficult for many listeners to fully relate to the pain that underpins so many of these songs, but all will doubtless be moved by the sense of hope that prevails. While the material addresses a broad spectrum of emotions from anger and despair, it is love and compassion and, more than anything, hope, that impacts upon the listener most strongly.

Songs such as ‘Chemo’ and ‘This Disease’ tackle the theme of childhood illness head-on, while ‘Paediatric Brain Tumour Facts’ is a didactic, spoken-word piece, that provides an insight into the bigger picture of infant suffering. Unsurprisingly, there are tear-jerking moments in each of the above. However, songs such as ‘Make a wish’ with lines like, “breathe in/ tough kid/ go on/ make a wish” and ‘Mothers’ where Desmelik’s wife Clare sings of “covering her baby with love/ she is so kind but she can be tough” shed light on a different aspect of the experience of treatment. The defiant feel that imbues this album is set on opening number ‘Celebrate’ – “Have faith with fear/ have strength with your tears/ have anything you want/ the good Lord knows you deserve it.” The lines are delivered over a gorgeous piano backdrop and set the tone for marrying memorable melodies to challenging subject matter.

The stated goal of this album is to raise awareness of paediatric illness. In this it succeeds admirably. Any and all funds raised on account of the project will be donated to charities and organisations that have assisted the Desmeliks and so many other families at various stages of their need. As a collection of songs it works extremely well. Naturally, the subject matter makes the album an intensely emotive experience. However, there is a warmth to proceedings too which serves to remind us of the capacity that music has to heal us in times of hardship and the comfort that it is able to provide in times of suffering.