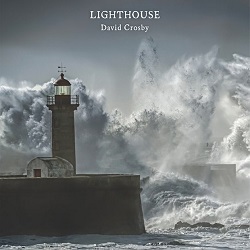 David Crosby’s new release is only his 5th solo album, a number that would no doubt be higher if it were not for the intervening CSN, CSN&Y, and Crosby-Nash albums that have appeared over the last forty eight years – not to mention the derailing of his musical talents in his bleak lost decade. It does represent an upswing in productivity though, appearing a mere two years after his last solo offering Croz. And if Croz seemed very much like a CSN album without the S and the N, but with such longtime musical associates as Leland Sklar, James Raymond and Shane Fontayne, then Lighthouse has the light jazzy feel that cropped up a lot on the last Crosby-Nash album (the imaginatively entitled Crosby & Nash). This is hardly surprising since Snarky Puppy bass man Michael League here contributes all kind of guitars, as well as being credited on most songs for music or lyrics or both, helmed the album as producer and adds vocals that are so very close to Nash that a couple of times the ear could be deceived. Only two songs of the nine that make up Lighthouse are credited solely to David Crosby. That’s actually not that different from Croz – and like Crosby’s main collaborator at that time, his son James Raymond – Michael League knows just how to write a song that sounds very Crosby.

David Crosby sounds a little weary on opener Things We Do For Love, time seemingly has taken its toll on his vocal range leaving him grasping at the higher registers. This is not at all unfitting for a song that charts a lifetime of love : “at first it’s just fun / but love is long / a little each day / you build it that way”. Lighthouse see’s a lot of imagery of lights – flickering stars, somewhat ironically for one of rock’s larger egos, give Crosby a sense of perspective in Drive out to the desert, and they are there again for The Us Below questioning why people can’t close the small distances between themselves. Shade or other absence of light haunts Look In Their Eyes which presents people “without a light, without a spark / look in his eyes and see the dark” – these “strangers in a strange land” are what our caring politicians demonise as “hordes” and “swarms”, Crosby see’s the reality of humans driven to desperate acts of migration. His anger strengthens his vocals – the gentle sounding Somebody Other Than You rails at those happy to send others off to war, and it doesn’t really matter who as long as it is “somebody other/ somebody’s brother/somebody other/anyone other than you”.

Lighthouse sits as a third instalment of a late flourishing of creativity, part of an ongoing series following on from Croz, and Crosby & Nash. Both of those albums allowed Crosby to do what he does so well, point fingers and question attitudes and sound like he gives a damn. On Lighthouse there are still angry songs, but the anger is muted by the jazzier arrangements, the sentiments as strong but with an acknowledgement that somehow the optimism of the sixties cultural flourishing somehow got lost along the way “shame on me” Crosby sings “for thinking I can be / somebody who is free / really, actually”. Sometimes you need to rock to get these messages across – Lighthouse never turns it up to eleven. It does have a couple of really stand out songs though – What Makes It So revisits a common Crosby theme of freedom, cutting one’s own path and not bowing to authority, and does it well, whilst By the light of common day brings in additional vocals from Michelle Willis and Becca Stevens to create an uplifting album closer that breathes at a warmer temperature than the rest of the album – not just little guiding lights anymore but the sun breaking through threatening storm clouds.

Lighthouse has David Crosby musing on love, separation, the unfeeling establishment and the easy injustice handed out to the helpless. In other words – does what David Crosby does best.