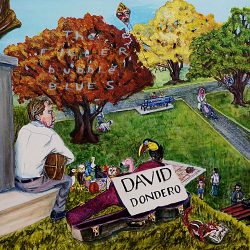 What does it say about me that I hadn’t heard of David Dondero before this LP? Especially given that in 2006, NPR’s All Songs Considered named him one of the best living songwriters alongside similarly underrated names like Bob Dylan, Paul McCartney and Tom Waits. Who knew? Well, lots of people, it seems. So here I am, a Johnny-Come-Lately telling you all what I think of this veteran singer songwriter’s new album – his. I know. The neck.

I’m glad I did a little bit of research on this. I was surprised at how much like Conor Oberst he sounded and was listening to it thinking he’d been influenced by him. Turns out, it’s the other way round. Conor Oberst credits Dondero with giving him confidence in his own voice, and it’s not difficult to see why. There’s a striking similarity in their voices, though Dondero has yet to find the success Oberst has, a topic visited by Dondero on his 2010 album ‘Zero With A Bullet’.

All of which is by-the-by as the only thing of any importance is whether or not these songs are any good, which they are and should be, given this is his 10th LP. It’s a biting, wary, heartbroken and sometimes hilarious sendup of the landfill tip fire that is modern American political theatre and identity politics. It’s sad, angry and clever, with some genuinely funny lyrics and some direct and vitriolic ones too. “Lock the bastard away when the pendulum swings,” he sings on, um, ‘When The Pendulum Swings’ which you do not have to be a genius to guess who he refers to.

Yes this LP is political, but there’s humour in it too, as on ‘Thought I Was a Hurricane’ where he’s at an ’80s metal show and depressed in Central Florida: “I couldn’t rock you like a tropical depression, just bummed you out with my confession,” Dondero sings, “but the Scorpions are gonna be playing in Tampa tonight.” And it’s needed, this light relief, because it is at times a little heavy, and rightly so, it is heavy times; but like Billy Bragg, Phil Ochs and Dylan before him, he is saying the right things in the right way at the right time, and like those, he’s pretty good at it.

Timely riposte to a world getting madder