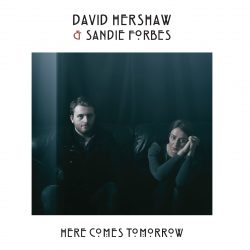 a twelve track debut album from a Scottish contemporary folk duo with all but one of the songs being largely written by them. The album is very strong and demonstrates the undoubted talents of both musicians who, whilst being joined by a few guests provide almost all instrumentation with Hershaw a clearly accomplished guitarist and Forbes a mean fiddle player. Most vocals are provided by Hershaw but it is the harmonies that stand out and on Old Wooden Heart, a charming love song, they compliment each other beautifully.
Forbes only lead vocal is on Footprints In The Tracks which is a lively piece and one of the stand out songs on the CD although on this track and many others it is Forbes fiddle playing that steals the show rising and falling effortlessly – a real skill and one which she clearly possesses. Whilst this is mostly an acoustic offering there are plenty of melodies to provide hooks in addition to Footprints, notably New York City Rain which is delivered with exuberance mirroring the place itself and Turn It On A Sixpence which could be mistaken for a classic 60’s folk track having something of the style of Eddie Reader about it. The one cover is Moonshiner, a traditional song about whisky and beer which is a stand out on its own but the whole album is really strong and it is clear that we are witnessing the start of a great future for these very talented folk artists.
6/10