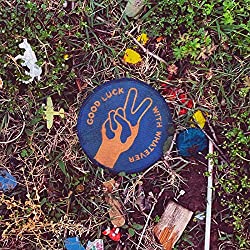 Nashville’s famed RCA studio A has a renowned roster of great recording sessions dating back to its birth in 1965, from the Beach Boys and BB King, to recent albums by Jason Isbell and Chris Stapleton. The latest release from LA-based Dawes–their seventh studio album– shares production credits with Isbell and Stapleton, producer Dave Cobb having made Studio A his recording home. As would be expected from the six-time Grammy award winner Cobb, ‘Good Luck With Whatever’ features top-notch production, letting the all-original songs shine, with varied arrangements maintaining listener interest throughout the nine tracks.

The album’s songs are written by Taylor Goldsmith, featured on guitar and vocals, with the band line up completed by Griffin Goldsmith (drums), Wylie Gelber (bass) and Lee Pardini (keys).

‘St Augustine at Night’ strikes a contrasting note, a reflective and sensitive tale on acoustic guitar and piano unfolding as Goldsmith sings “I have never had much say in how I felt/I’ve been guided by my barroom appetites/So if this world belongs to everybody else/Just leave me St. Augustine at night “. His vocals here demonstrate a vulnerable and gentle side, but are equally potent in the albums’ full-on rock numbers.

The latter side is restored in the following track ‘Who do You Think you’re Talking To’, very much in the Springsteen mould, all big riffs, razor-sharp percussion and strong and memorable melodies, an impassioned appeal to a lover “Who, who do you think you’re talkin’ to?/Is it the man that was here before me?/The one that wrecked you hard and walked/’Cause if it isn’t, I’ll let you talk/It’s clear, that’s somethin’ you’re still workin’ through/But who, who do you think you’re talkin’ to?”

Goldsmith’s lyrics are strong throughout, perhaps no more so than on mid-tempo ‘Didn’t Fix Me’, a reflection on how all the things we yearn for in life can still leave us strangely unsatisfied, from peer acknowledgement in “a nomination/for an award I don’t need” to love “I finally found someone that loves me/And to her I will be true/She sees the ways in which I’m ugly/
And loves me for those reasons too/And even though I’m feeling stronger than I/Ever thought I could/It still didn’t fix me”.

A powerful collection, delivered with great style and panache.

Potent collection with echoes of Springsteen and Supergrass