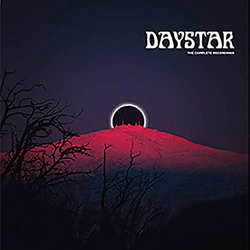 Forged in the melting pot that is the current music scene in Portland Oregon, Daystar are essentially a celebration of all that’s good in power pop, the band swearing allegiance to Big Star, Badfinger and Cheap Trick among others. ‘The Complete Recordings’, despite its retro leanings, is no retrospective collection from a deceased band, rather it is the four piece’s debut album and if it’s anything to go by, hopefully there’ll be more to come.

The band is comprised of Derek Phillips on lead vocals, rhythm guitar, piano and Mellotron, Joel Roth on guitars, Kelly Simmons , bass, harmony vocals and cello and  Nick Foltz, drums, harmony vocals and piano with Phillips providing the lyrics. Together they make a swell noise and basically do what it says on the tin with the 12 songs on display featuring power chords, snappy melodies and great harmonies while there are also moments of tranquillity, pastoral whiffs of psychedelia wafting into the mix.

‘Right At Home’, the opening song, and ‘Buttons And Brass’ are joyful celebrations of the thrill one gets when a band gets down to the basics of power pop. Recalling Big Star and Dwight Twilley, they surge with energy, good vibes and good times. Listening to these is akin to recharging your mind’s musical batteries. Also packing a powerful punch is the Stones’ like run-around of ‘The Ballad Of Sister Sadie May’ and the raunchy rock’n’roll of ‘People Get Lonely’ which rolls along in a grand manner with Phillips’ vocals reminiscent of Paul McCartney’s holler back when he used to rip it up. The McCartney comparison is a clue to much of the album as, stripping away the latter day power pop comparisons, much of the bedrock here is The Beatles circa ‘Abbey Road’ and the respective early solo albums from the fab four.

‘All That You Know’ could be an outtake from ‘Abbey Road’ as its liquid guitars spill from the speakers while ‘Warped Reality’ quotes George Harrison’s ‘Isn’t It A Pity’ in the lyrics. ‘Summer Girls’ struts majestically over insistent jabs of piano with swathes of gilded guitar soloing and soaring harmonies and ‘Sunny Golden Side’ has a mesmerising repetitive psychedelic guitar swirl guiding it along. Crowning all this are the glistening chimes of ‘Angelina’, a glorious number which is a veritable wall of sound as guitars climax again and again over a wonderful smorgasbord of keyboards, the descending chords towards the end allowing it a quiet majesty.

Ok, some might say that Daystar are derivative, but, be that as it may, they conjure a wonderful sound and ‘The Complete Recordings’ is well recommended to anyone in love with jangled, starry eyed and propulsive power pop.