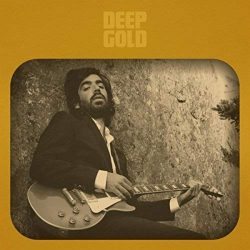 Singer-songwriter Deep Gold already has some reputation to live up to ahead of the release of his self-titled debut record. The former JOAN frontman has received comparisons to a holy trinity of legendary artists – Tom Waits, Bob Dylan and Leonard Cohen. The record begins brightly, with the initially upbeat ‘Don’t Worry’, drifting along unassumingly before reaching a grandiose chorus featuring a brass section triumphantly blaring over a hollering chorus. The bluesy stomp of ‘Hot Dogs For Sale’ follows, and is an early highlight. It oozes a dive bar sleaziness, perfectly suiting Deep Gold’s raspy delivery.

Deep Gold’s world-weary vocal is the most striking aspect of his songs, and will no doubt create and defy misconceptions regarding his age (he’s still in his late twenties). There are very few frontmen around at the moment who can pull off this style under the age of seventy-five, but the Mainer manages to do so with a natural cool.

It is a pity that many of the songs on the record do not fulfil the potential that such a unique vocal talent promises. The lyrical content is often overly simplistic, particularly on the middling recent single ‘The Hellhounds’, and the melodies are largely bland, such as on the mediocre ‘Rain’, which is as bleak sonically as its title would suggest.

Overall, ‘Deep Gold’ is a largely unsatisfying listen. Despite a plethora of lush string and brass arrangements and often enthralling vocal delivery, these are wasted with a banal form of storytelling, with very little to get excited about.

Less Deep Gold, more of a deep grey on this debut release