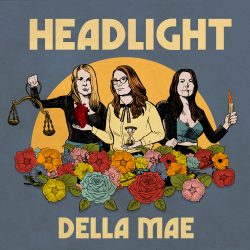 Earning a Grammy nomination for best Bluegrass album in 2014, Della Mae’s new album ‘Headlight’ demonstrates that they have moved beyond the conventions of the genre. Pushing aside expectations to use solely traditional bluegrass instruments: organ, Mellotron and electric guitar, amongst others, feature, speaking of a new-found independence and sense of freedom. The opening title track serves as a hymn to sisterhood and reflects Della Mae’s advocacy of women’s rights.

Many of the songs on this album give a view of women at different points in their lives; indeed, the personage of Della Mae herself appears in many Bluegrass songs.

‘Change’ opens with a slow double bass shortly to be joined by the harmonies of guest vocalists, The McCrary Sisters. A short track but nonetheless impactful in its message of hope persevering through the ravages of time.

‘The Long Game’ moves in to more contemporary territory reminiscent of Mary-Chapin-Carpenter. There is some fine fiddle work here from Della Mae’s Kimber Ludiker which lifts this track above its somewhat predictable structure.

‘I Like It When You’re Home’ provides an irresistible rhythmic background to some spirited vocals whilst ‘The Odds of Getting Even’ seems to bear the spirit of freedom. ‘Waiting for you’ is a sad and moving piece on the longing for a child when it might not be possible and how it is to be living in a world that takes having children for granted.

‘Headlight’ exhibits a spirit of determination and hope, showing Della Mae moving in new directions whilst giving a nod to their traditional roots. It is not a wholly consistent piece, with one or two of the tracks verging on the formulaic but there is reward enough in their music to ensure that they shine through with their engaging spirit.

A spirited and engaging work that inspires both musically and lyrically