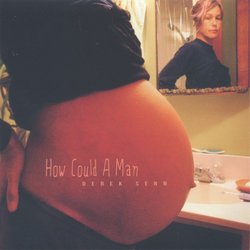 California local Derek Senn took a weird and winding way into music, having a few early brushes with the guitar but not really picking it up seriously until his thirties. Armed with a sudden desire to write songs, he started working away diligently down in the song mine, the subject of the tenth track on ‘How Could A Man‘, his third album to date. The hard work has clearly paid off, because this is a heartfelt, funny, brilliant piece of work.

The opening line of the record kicks in: “I had a great day of surfing, surfing in my cubicle.” It sets the tone for the record in a lot of ways. Senn has his own unique style, a mixture of satirical observation, frank confessional, and the occasional shot of poetic beauty, straight to the heart.

The slightly on-the-nose lyrical style might not be to everyone’s taste, but there’s such an honesty to it, and it’s delivered with such obvious good humour, that it’s impossible not to fall for its charm. Senn writes about life; he’s married with two young children and a day job, and has a lot to say. The songs range from the searing satires of suburban life on ‘Nuclear Family’ and ‘Have A Nice Day’, to the hilarious recounting of an attempt to live it up with his wife when the kids are away at camp on ‘Be Careful What You Wish For’. “We used to be hardcore, but not anymore”, he sings. This ostensibly comic song about family life ends with a line of such earnest melancholy that it makes you stop dead; this is a power Senn has, and uses to great effect across the record. Not unlike Louden Wainwright, Senn has developed a knack for saying something achingly honest and relatable with a wry smile.

The music itself can’t be overlooked either. A couple of the tracks are stripped down, just Senn and his acoustic, but the rest have a full band of instruments and produce an incredible range of sounds. There’s some Beck-esque stoner folk tracks, there’s some heavier Lemonheadish notes, and even some proper funk guitar at one point. The album fizzes along without a dull moment and invites multiple listens.

Senn is a seasoned songwriter and an accomplished musician making music for the joy of it. The freedom of working independently is something he clearly takes advantage of and revels in, writing songs in various musical styles and keeping things interesting, for his own sake as much as ours. He’s evidently having a great deal of fun, and it’s infectious. By turns silly, serious, and sonically exciting, Senn’s weird and wonderful approach is something we need more of. Bravo.