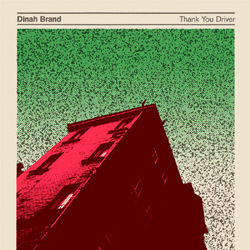 A four-piece band from Dublin, Dinah Brand prove to be quite a seductive listen on this, their third album. There’s a dreamlike quality to much of the album, the songs almost translucent as they float from the speakers. Despite this apparent lightness of foot there’s a powerful engine room driving the music. A nice sludgy bass roots the band while percussion is spare and efficient. Over this bedrock, guitars glide, shimmer and occasionally, growl. It’s reminiscent of various bands and eras. Scratch at the surface and you’ll find traces of Neil Young, The Church, Dave Gilmore’s Floyd songs and other English psychedelia, while a closer look might remind some of obscure Americana bands such as Granfaloon Bus or Souled American.

The vocals add to the ethereal sense which permeates the disc as they are light and feathery, slightly strained and buried somewhat in the mix. Altogether, it works well especially on the slightly psychedelic ‘Garden’ which has some of that fabled Canterbury sound from the sixties while ‘Other Heads’ is a delightful pastoral stroll delivered with a gossamer touch. ‘Protagonist’ shows the interplay of the two guitarists at their best while ‘Lagos’ closes with some fully-fledged gutsy guitar soloing. ‘Old Track’ does threaten to break into a trot but soon settles into the languid style of the album.

With lyrics which are quite opaque at times the album stands or falls on the strength of the music and, aside from a general sameness throughout, it  stands tall.