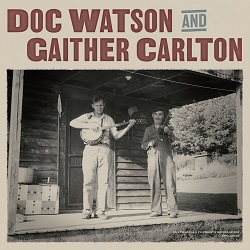 The New York folk scene of the early 1960s is one of those legendary moments in the history of popular music where an explosion of new talent mixed freely with the previously neglected talent of a previous generation and lit a spark that would turn the next ten years into a blaze of amazing music both traditional and wholly new but well rooted in that tradition. You can catch a flavour of a time that was alive with new musicians learning from old musicians, and newly fired up enthusiasts finding that their rarely recorded heroes were still alive in the memoirs of Dylan and Dave Van Ronk and be left envious for missing out. And this album is another opportunity to vicariously visit this tumultuous time.

This new release from Smithsonian Folkways features recordings from Doc Watson’s earliest Greenwich Village gigs, in the company of his father-in-law the noted fiddler Gaither Carlton. And the first thing to note from the cover picture is that Doc is sporting a banjo – and the album has him mixing his time between banjo and guitar. These live recordings are alive with excitement – and it’s hard to decide who is the more surprised, Doc Watson finding that there’s a young city audience thrilled to hear his incredible playing and repertoire of songs, or that young audience discovering just what is possible in the way of guitar, banjo and fiddle playing and also that there are so many more songs than The Weavers and The Kingston Trio had offered them.

The opener, a moderate tempo reel called ‘Double File‘, acts as a calling on tune, with Gaither Carlton’s fiddle dominant. It takes a more supporting role on ‘Handsome Molly‘, where Doc Watson plays banjo and sings in his memorably rich baritone. It’s fiddle and guitar for ‘He’s Coming to us Dead‘, a song that Doc Watson dates to the Civil War.  It’s a strange song involving a mix-up over where to pick up a corpse at the railroad station –  it’s a tragic tale that borders on the comic : “‘you do not understand me sir’ the old man shook his head / ‘he won’t be coming as a passenger but by express’ he said“.

Songs such as ‘Reuben’s Train‘  fairly crackle with the interplay between banjo and fiddle, with a percussive stomp of the foot clearly audible.  The flatpicking on ‘Billy in the Lowground‘ is superb.   ‘Bonaparte’s Retreat‘ features Doc’s guitar playing on this new rearrangement of the fiddle tune which he explains whilst introducing it “I don’t know if this old tune was ever done like this or not until we decided one day we’d figure out a way to play it with guitar for the old time version of Bonaparte’s Retreat“.  Which, in a sense, illustrates why Doc Watson was such a pivotal figure in the development of American Folk music at that point – he knew the old tunes, he learnt new tunes from records and made them sound old, and he took his native fiddle music and made it work for his instruments – banjo and guitar.  This is an album worth hearing not just for its historical and archival value – it’s a superb folk club set that you can’t help but wish you’d been able to catch.