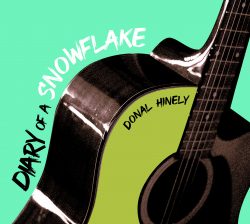 It has to be said: there is a massive clue in the title. Written, recorded and released during the Coronavirus pandemic, this raw, explicit, collection of social-commentary songs will strike a chord, and shock, in equal measure.
Spoiler alert: the satire and parody throughout this album are quite apparent and are exquisitely fascinating but can be confusing and upsetting at the same time.
Hinely takes no prisoners when he confronts subjects such as racism, domestic violence, religion or politics. However, no matter your personal opinions, Hinely’s narration and sensitive musicality, the questions raised, and the observations explored will undoubtedly make you think.
The opening track dives straight in with our very maker questioning “why did I start this ‘dirty business‘?” A sad indictment if ever there was one. Musically though, it is thoughtfully contemplative, rather than mournful, with great beauty to it.

Because of the pandemic, Hinely had to improvise a home studio for the recording of this album. So, with two microphones and a laptop, he simultaneously recorded his guitar and vocals, capturing one unedited live performance for each song. Producer, David Henry (R.E.M., Cowboy Junkies, Gretchen Peters) then masterfully added his obviously boundless talent with his strings, mandolin and organ arrangements bringing unrivalled beauty to such intense subject matter.

Remarkably, ‘You Call Yourself a Christian‘ questions the integrity of each and every one of us. You don’t need to have any religious belief to take from these lyrics, but you do need a conscience. And, again, with its light, perceptive feel, the melody of this song helps the lyrics hit home. Most notably, the message here is for everyone, regardless of faith. Faith is most definitely not the issue.

‘Bad Love‘ tackles the subject of domestic violence head-on. Yet again, though, the groovy feel to the melody will almost certainly have you singing along. Such is the genius of this song.

You won’t sing along to ‘Couldn’t Breathe‘, but the sentiment will reach deep. Listen to it. The fabulously intriguing intro will draw you in then the lyrics will have you humbled. The subject matter needs no explaining.
With ‘Great Again‘ and ‘Cover Your Ears‘ however, politics may well be the issue, although the commentary is bang on. The biggest concern with ‘Great Again‘ is that it is picked up in the wrong way and the wrong people run with it. Like Springsteen’s ‘Born in the U.S.A.‘, ‘Great Again‘ could easily be mistaken for an uncomplicated celebration of patriotism. That would not be great. But, it would not harm Hinley of course, who even goes to the lengths of apologising in ‘When Skies are Gray‘, for his bleak outlook at such sunny times.

Hinely, it would seem, excels at subtlety, as well as the lack of it, but despite, or, even in spite of this, he has produced a hugely compelling album. Vocally he is infinitely listenable, and musically this album hits every note.