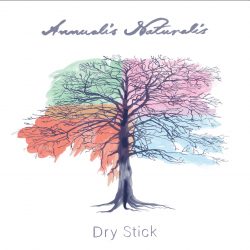 Truth be told, an artist name evocative of trees and an album title in Latin more than likely sparks images of neo-hippies lamenting on their ukuleles. But don’t take that for granted, as Dry Stick delivers an edgy first album that sounds sweet as a dove, and still rocks big time. The puppet master behind Dry Stick is the Danish songwriter and brilliant instrumentalist Kudre Haan.

The man is definitely not a newcomer on the music scene, as Haan already has four albums under his nom de plume of Homesick Hank. The maturity of his songwriting is demonstrated throughout the density of ‘Annualis Naturalis‘. And dense it most certainly is: the album contains an impressive sixteen tracks, in a time where EPs and 8 track LPs are shelled out by the truckload. Each song is a carefully created and recorded piece that not only exhibits the nuanced beauty to be expected in a good hit single, but also fits into a cohesive whole. The mixture of ethereal balads (‘Summertime’, ‘My Refuge’), hard-driving vocal duets with twang (‘Morning Bird’, ‘Where Do We Go‘), rocking pedal steel driven numbers (‘Gated Community‘) and delicate instrumentals (‘Valse Mélancolique’, ‘Midsummer‘) just works.

The record often evokes memories of Neil Young thanks to Haan’s tenor vocals, always spot on throughout the record and absolutely superb on the sweeter, whispered stuff (‘Easy Summer‘). But ‘Annualis Naturalis‘ still sounds modern and just as fresh as a spring night on a Danish beach. The abundance of ambient guitar tracks, crisp piano lines and the multiple tiny aural details sprinkled all over the tracks are a big part of that sound. One thing is for sure – this album will soothe the most discerning ears, spin after spin.