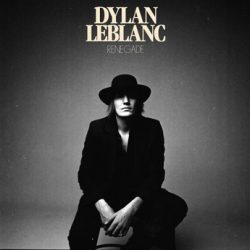 Whenever you’re looking through the liner notes of a record and you see “Producer: Dave Cobb” you know it’s definitely worth a listen. Dylan LeBlanc’s 4th release ‘Renegade’ follows suit. Cobb’s brilliant, signature sound shines through. He has a brilliant way of creating a polished and modern, yet vintage sound. LeBlanc, on the subject of working with Cobb says “I let go almost absolutely and let Dave Cobb do his work. It was a different experience for me—how focused Cobb was and how quickly we would get live takes down.”

You can pick out timeless influences such as Tom Petty, Bruce Springsteen, Neil Young, Jackson Browne and more during this record. LeBlanc stated on one of his Facebook posts that he wanted to make “a more edgy rock n roll album”, he hasn’t failed that aim. The trio of guitar led opening tracks ‘Renegade’, ‘Born Again’ And ‘Bang, Bang, Bang’ set the perfect tone for the record. LeBlanc gets across what he wants to achieve with ‘Renegade’ very quickly. His vocals sound almost strained in ‘Born Again’ but hell, does it work. They complement the guitars in a beautiful and soulful manner.

LeBlanc gives us a minute to catch our breath in ‘Domino’. An acoustic guitar is introduced to create a base layer for the track. The verses groove. Musically, you may pick out some Doors-esque influences here. The chorus picks up intensity, with LeBlanc gradually building up the dynamics with the lyrics “feeling like you’re nothing at all”.

We’re rocking out again in ‘Damned’, Neil Young influences come crashing through in this track. The highlight of the song is the short and simplistic yet epic guitar solo. LeBlanc’s longtime band The Pollies feature on ‘Renegade’ and man are they impressive. Laying down a base for LeBlanc’s thoughtful songwriting in the same way that the 400 Unit wonderfully accompany Jason Isbell and the E Street Band accompany Springsteen.

What is really great about this album is how LeBlanc has structured the track listing. He really hits you hard up top and gives you some nice melodies and catchy hooks in the middle, and then grabs you with the beautiful ‘Honor Among Thieves’ to wind up the record, featuring well arranged string sections that add emotion to the middle 8 section. A really lovely way to end what is a great offering from Dylan LeBlanc.

‘Renegade’ gives you everything. For whatever mood you’re in, there is something that will satisfy. There’s moments of greatness from the guitars and LeBlanc’s vocals as well as brilliantly thought out songwriting choices. Dave Cobb smothers the album in… well, Dave Cobb, and it’s absolutely awesome. From epic guitar solos to heart wrenching string arrangements, this could well be on my top 10 2019 albums already because it keeps getting better after every single listen.