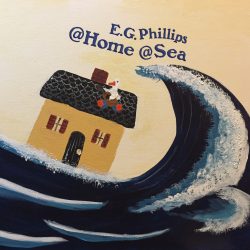 As a singer/songwriter it’s always considered an advantage to have a distinctive voice – but can a voice be a little too “distinctive”? You can argue that a very distinctive voice never harmed the sales of the likes of Tiny Tim, Tom Waits, Neil Young and many more – but it will often polarise opinion; for every fan of Tom Waits’ signature growl there will be someone who is less than enthusiastic.

E.G. Phillips definitely has a distinctive voice and it’s likely to be another one that polarises opinion. It’s an odd, loping singing style that has been described as “lounge crooner meets street busker”, which isn’t a bad description.

On listening to his latest release, “At Home At Sea”, this reviewer was reminded a lot of the late British singer, songwriter and poet, Jake Thackray. Phillips has the same stylised delivery and often over precise pronunciation and it’s a style that can tend to dominate a song to the point where you only hear the voice and not the song itself. Which is a shame because there are some good songs here, especially once you get past novelty opener ‘The Albatross Song’. ‘An Alternate Route to Your Heart’ is a gentle, piano driven song of unrequited love that is clever and poignant – “How do you reach into my being so effortlessly? Ever so distant, no matter how near we are”. There’s also a nice, laid back vibe to ‘All I Can Share is Photos’ with its slightly discordant Bossa nova tempo and almost spoken delivery.

Perhaps the most striking cut on the album is penultimate track ‘You Will Sail With Me’, which has an eerie quality and a more serious feel to it than many of his other songs, with the repeated line “I know it’s just a dreamboat, but I like it anyway” and some fine instrumental work at the tail end of the track with sweeping guitar chords and tinkling percussion; it’s a track that really does bear repeated listening and becomes a bit of an earworm quite quickly.

Unfortunately, the rest of the album is too whimsical and too busy trying to be lyrically clever. Song titles like ‘A Finnish Midsummer Midnight’, ‘The Comet and the Wandering Moon’, ‘Your Inexorable Pull’, all betray a writer who is too wordy, often trying to cram lines that don’t scan into too short a musical phrase.

Phillips has said that this album was about showing off the influence of Jazz music on his writing and you can detect a strong element of jazz phrasing in his music, along with elements of his other cited influences – Tom Lehrer and Bob Dylan, among others. This has also, apparently, been an exercise in resurrecting and re-writing older material and this seems to add to the disjointed nature of the album. I suspect this is a deliberate decision on Phillips’ part and it does have a definite effect, though not always a good one. The album is well produced by Ben Osheroff who also contributes some very tasty guitar work but it’s hard to escape the feeling that this album is quirky for the sake of it, not because it serves the music.

If you like intricate lyrics and the sort of musical jokes delivered by the likes of They Might Be Giants then this might well be one to check out but it’s hard to see this album having wide appeal.

At Home At Sea fails to float the boat